Stone conservator Marcin Pikus and his assistants were involved in a major building stone conservation project lasting nearly two years under contract to Berglund Construction Company for the U.S. General Services Administration. The base contract and change orders had a total value of $420,536.47. The work involved restorations to deteriorated sandstone located at the upper levels of the Joseph P. Kinneary U.S. Courthouse in Columbus, Ohio. Work was performed on stone in-place as well as stone removed to our conservation facilities in Oberlin. 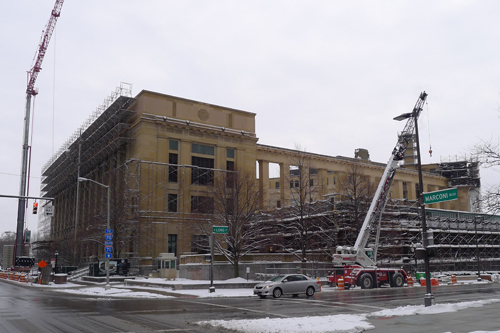 The Kinneary Courthouse is located between the Scioto’s River east bank and Marconi Street in downtown Columbus, Ohio. Built in 1932-34, it was one of the last federal buildings to be commissioned to a private firm from the Public Buildings Act of 1926. The exterior of the courthouse was designed in the neoclassical style. The steel-framed building is clad with Ohio sandstone above a watertable of honed pink-gray granite, with secondary features such as door surrounds and belt courses set off in complementary variations. The building is an example of rather restrained, neoclassical design; however it features variety of architectural elements such as: horizontal belt course decorated with floral ornament divided by triglyphs, lion heads, large octagonal federal seals, fascia, volutes, sword/wheat panels, and majestic eagles perched on pedestals. The highly ornamented south facade features also a large allegorical low-relief frieze depicting Justice flanked by Industry and Agriculture. 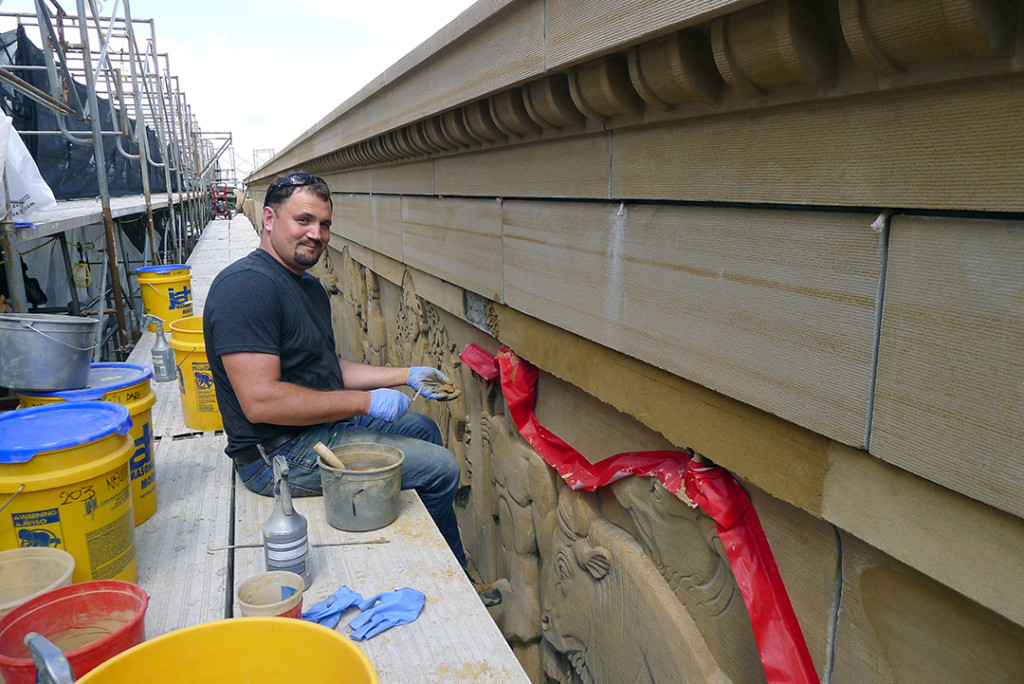 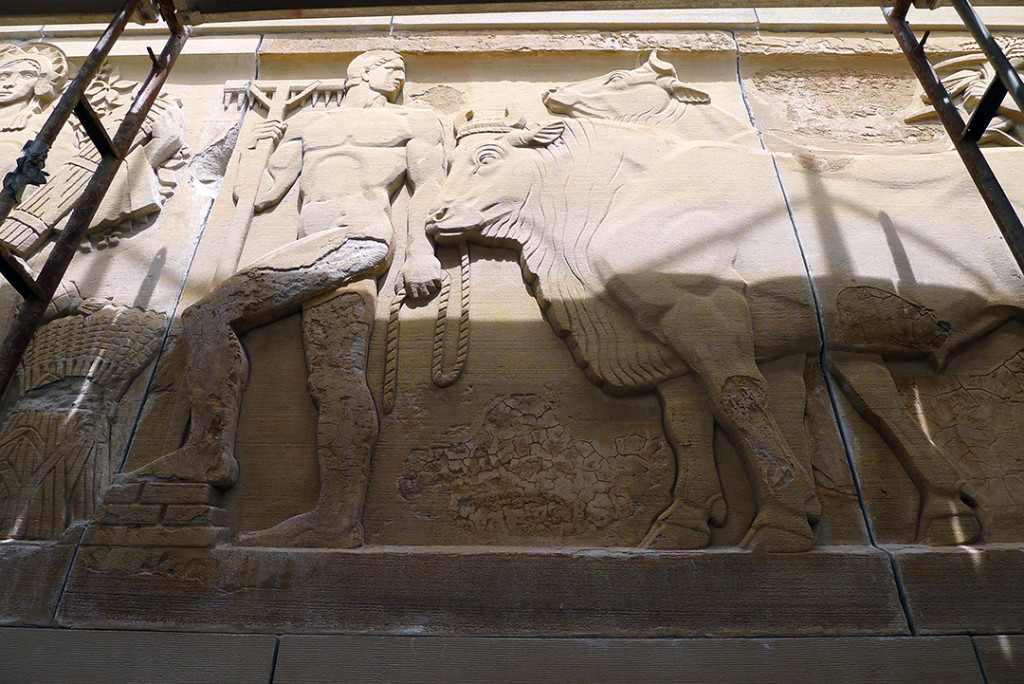 The condition of the ornamental sandstone elements varied. Some of the most deteriorated elements exhibited wide areas affected by contour scaling, caused by freeze/thaw cycles, and subflorescence occurring approximately 0.3 inches beneath the stone surface. Numerous elements showed old composite patches of various sizes. The largest patches were several feet long. These “repairs” had been painted with a thick cementitious coating to even out the color variations. The mortar used for these repairs was intensely orange and had become weak when wet. 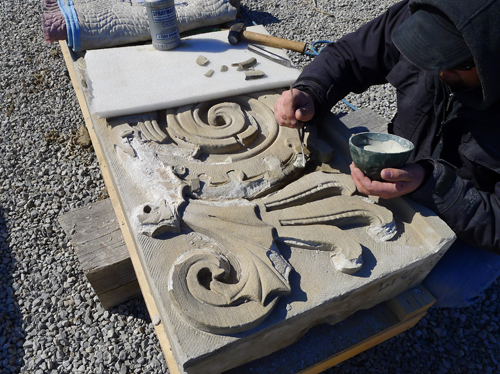 The conservation treatment of the sandstone elements consisted of three essential steps. All the sandstone elements exhibited various concentrations of dark soiling. The most intense soiling was found on upward-facing surfaces. Additionally the stone was polluted with atmospheric particles like dust and soot. Occasionally there were deposits of tar or paint and colonies of algae. Also, many elements are partially covered with a pink-tinted cementitious coating. 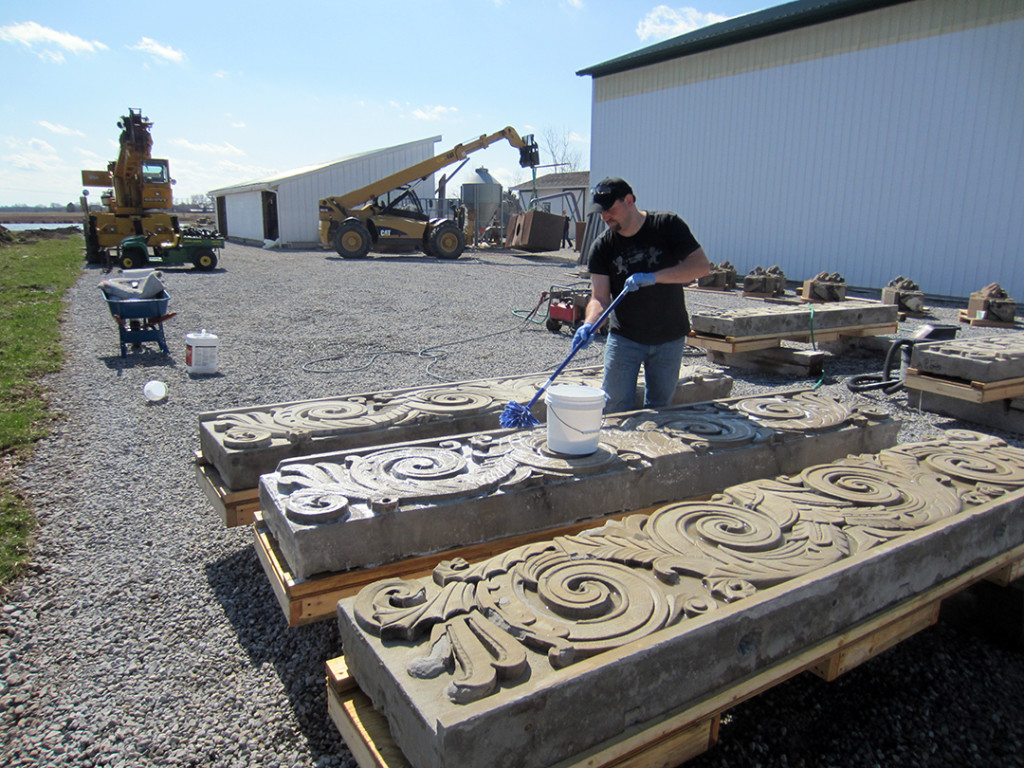 The cleaning started with the removal of the old caulking from the edges of each element. The loose pollutants and algae were removed by presoaking the substrates with a detergent and the biocide D/2 and subsequent pressure water cleaning. The dark crust soiling was successfully removed with a dilution of Restoration Cleaner/PROSOCO and pressure washing. The cementitious coating was modified with acrylic resins, making its removal possible with paint remover. Further steps of the treatment addressed the damaged elements. The stabilization of the cracks and scaling was achieved by the use of injecting grouts and acrylic dispersions. 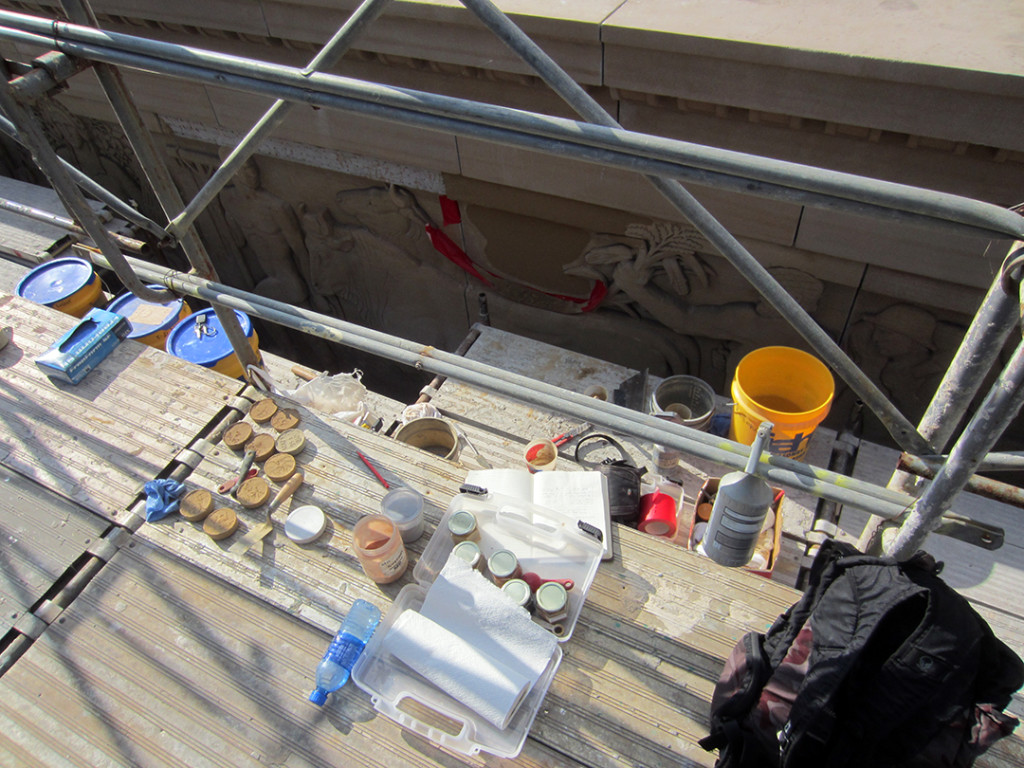 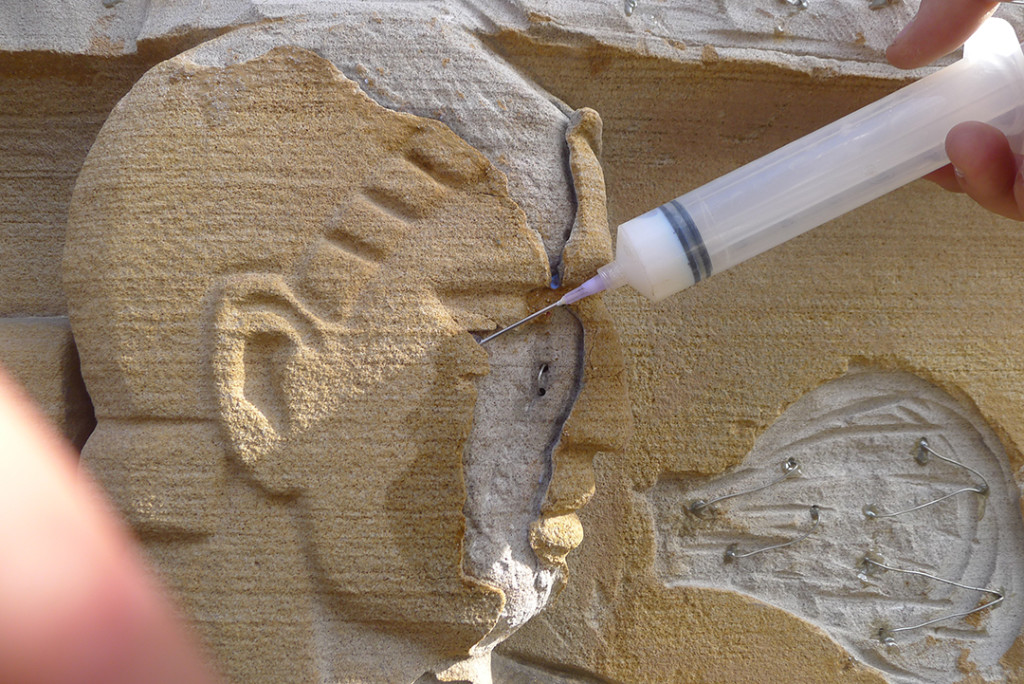 Missing fragments of the stone were recreated using a color-matched JAHN restoration mortar. In most cases an armature made of stainless steel rods and wires was used to provide an additional reinforcement and to enhance the stability of the fills in the future. 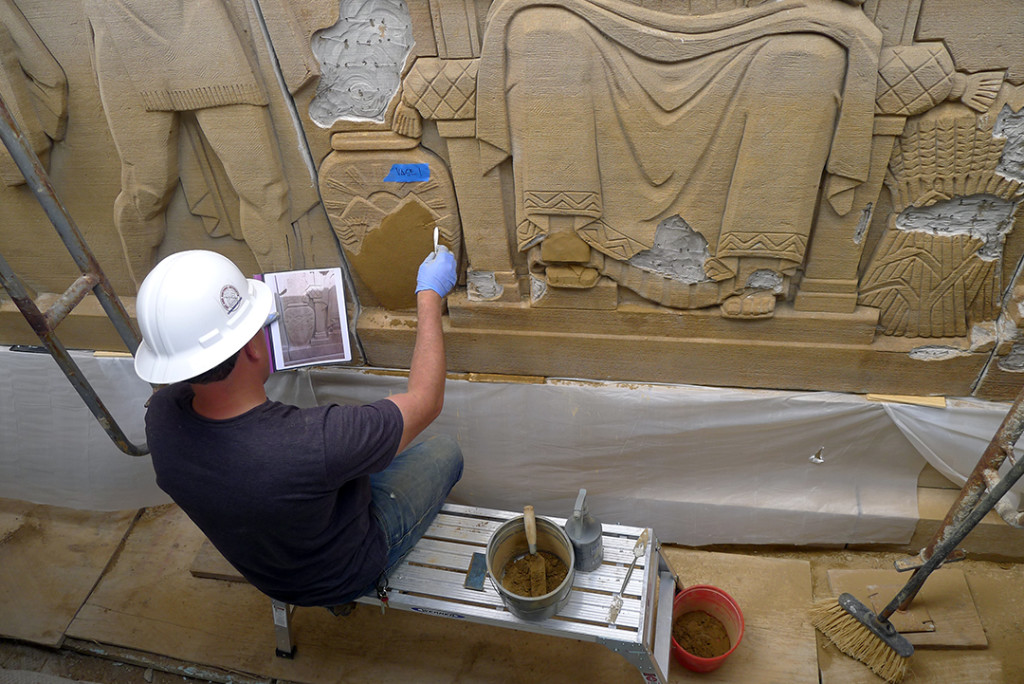 Maintenance of a Bronze Memorial: Conservator Born a Coal Miner's Granddaughter
Between a Rock and a Contemplative Place: Outdoor Sculpture Treatment in Seattle
We Got Your Toes: Revisiting The Restoration of a Zinc Sculpture
The Eagles Have Landed! At the Andrew W. Mellon Auditorium