Tucked away, in a hidden courtyard behind the Dolley Madison

House, and on the back wall of the adjacent Cosmos Club on Lafayette Square in Washington DC, is a real gem of a find:

Originally prominent on the facade of the Whitney Museum of Art’s second home in New York City, as well as used on the museum’s letterhead as its official logo, the EAGLE was donated to the U.S General Services Administration (GSA) through the wishes of former First Lady Jacqueline Kennedy, when the Whitney’s building was sold to the Museum of Modern Art in 1966; and hence it was relocated to Washington, DC.

There, Iselin’s EAGLE was present for the dedication of the new (Howard T. Markey) National Courts building on September 20, 1967, that new construction making a new entryway to the now deeper, back courtyard behind the Cosmos Club building and the Dolley Madison House.

Our sculpture conservation conservators’ conversations with historians and a retired building manager heard the story told that Jackie Kennedy had personally chosen this spot for the EAGLE emblem, and had even requested it be installed in such a way that it would never be removed.

Her wish was very nearly granted.

What looked like a straight-forward sculpture conservation project starting with just a removal – put on straps, unbolt, and lift free – turned out to be much more complicated.

During the Iselin’s EAGLE conservation project, McKay Lodge company sculpture conservation experts made two attempts to remove the sculpture before realizing just how securely, or permanently, it was anchored into the brick supporting wall behind it, as if it were really true: that she “wanted it installed in such a way that it would never be moved.” Why?

“We couldn’t figure out why we couldn’t get it (the EAGLE) off the wall, its a simple part of sculpture conservation stuff we just do” says McKay Lodge company sculpture conservation president Robert Lodge, clearly stressed over the accumulating substantial costs of having to call in on weekends an enormous crane, associated riggers and transport trucks twice so far.

In time. we would discover that it was installed in such a way that you’d have to destroy the wall to take it out.

Contracting with a video optical fiber scope professional, to snoop behind all areas of the installation and provide image documentation, confirmed the matter of our problem: lead project sculpture conservation expert Jim Gwinner concluded from this investigation that “whoever put it there…did not want it removed, ever, no doubt about that.”

Since destroying the wall of a national landmark was not possible, the project lead sculpture conservator, Jim Gwinner, had no choice but to daringly disk-cut two large access holes right through the bronze sculpted surface to reach a hidden cleat that secured it into the wall and then cut through the embedded attachments in there with a cutting torch.

The unexpected discovery was that all steel installation anchors had been permanently, and deeply, embedded into fresh mortar and new brick of the rear brick wall at the time of the building’s renovation in 1967 at the time of the construction of the new (Howard T. Markey) National Courts building.

The location of the torch-cut access holes was carefully chosen by Jim so that, when the two removed pieces of original bronze were eventually welded back into place, the new weld beads could be chased to blend back into existing texture on the sculpture, rendering these cuts invisible.

Then, the entire sculpture was lifted by crane out of the courtyard and over the 3-story building into the street.

After trucking it to our facility, we welded back into place the two pieces of bronze that had been cut away to make those access holes. Then we media-blasted off the green copper corrosion and the aged gilding – necessary for a fresh start at reconstructing the artwork’s original appearance.

We fabricated a new steel installation bracket and bolted it to the back of the sculpture for easier installation and any future needed removal.

Then, the entire artwork’s bronze received a black chemically produced patina and a durable clear coat to protect it from corrosion at our sculpture conservation facility.

Reversing the process to reinstall EAGLE proved easier. Our sculpture conservation staff lifted it back into place and hung it using two interlocking steel brackets; one attached to the wall and one bolted and welded to the reverse of the artwork.

Once again, the late Jackie O’s pet project resides in her favorite spot. 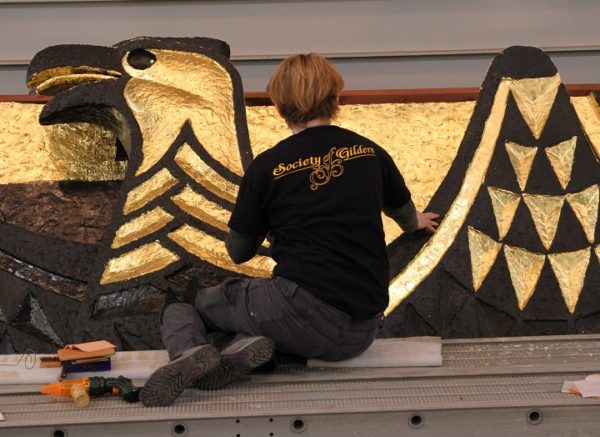