PAINTINGS CONSERVATION: In 2007 the Archdiocese of Louisville, Kentucky contracted with McKay Lodge Art Conservation Laboratory, Inc. to salvage a seriously deteriorated but very important painting by the Flemish painter Gaspar de Crayer (1584-1669). The twelve foot tall oil painting on canvas depicts the conversion of William of Aquitaine by Saint Bernard. At the completion of the extensive conservation work at the end of January 2008, the archdiocese will make a long-term loan of the picture to the Speed Art Museum in Louisville, Kentucky, one of the principal museum clients of McKay Lodge Art Conservation Laboratory, Inc. since 1990. De Crayer’s Conversion of William of Aquitaine had long been in the Cathedral of the Assumption in Louisville.

The canvas and paint had already had a hard life by the time someone glued it to plywood, perhaps 30 some years ago. The adhesive, a very thick, hard and black film, was similar to what was used to lay linoleum floors and it contained lead. Adhesive filled the many canvas losses and there was a considerable amount of insecure paint.

The paintings conservation process of saving the picture entailed first cutting away the plywood from the reverse of the canvas, then shaving away the black adhesive layer. After canvas inserts, readhesion of insecure paint, and preliminary surface cleaning the picture was lined with fine Belgium linen and mounted on a stretcher – thus restoring it to its original nature. Much old and darkened varnish residues were removed and the losses of paint were filled and inpainted.

Crayer was an extremely productive painter of the later Flemish school and is considered to have been bested in vigor only by Rubens and only by Van Dyke in refinement. His many works are widely distributed.

William IX of Aquitaine (1071-1126) was Duke of Aquitaine and Gascony and also Count of Poitou as William VII of Poitou. He is also famed as a troubadour, one of the first to use the medieval vernacular in verse and eleven of his songs survive. And he was a crusader. He was twice excommunicated but was readmitted to the church in 1120. A reading of his biography will show what a lust for life and women he had.

The Count of Poitiers was one of the most courtly men in the world and one of the greatest deceivers of women. He was a fine knight in arms, liberal in his womanizing, and a fine composer and singer of songs. He traveled throughout the world, seducing women. – Anon. 13th c. biography. 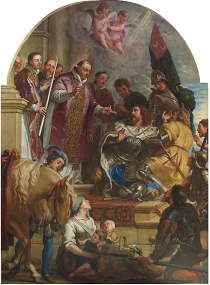