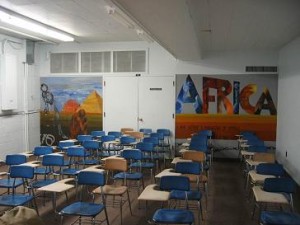 McKay Lodge Art Conservation Laboratory, Inc. was hired as an art consultant by the architectural firm Moody Nolan, Inc. of Columbus, Ohio, to look at Kent State University murals. As art conservation consultant for this conservation project, McKay Lodge Art Conservation Laboratory advised the architect on the relocation, restoration and preservation of numerous murals in Kent State University’s Oscar Ritchie Hall during the design phase of the building’s rehabilitation. McKay Lodge, Inc. conservator and president Robert Lodge conducted a condition study of the murals in 2004 for the university’s architect.

Kent State University then hired McKay Lodge Art Conservation Laboratory to remove the murals, conserve a selection of them, and store them for an eventual reinstallation in the same building. All this took place after the design phase of the project but ahead of the extensive rehabilitation of Oscar Ritchie Hall.

These murals were located throughout the classrooms of the building which houses the university’s African American Studies department. Almost all of the murals were painted directly on hardboard (such as Masonite) or directly on drywall that were well-attached to the building’s wood and metal studs. Thus removal of these murals intact was a particularly difficult matter.