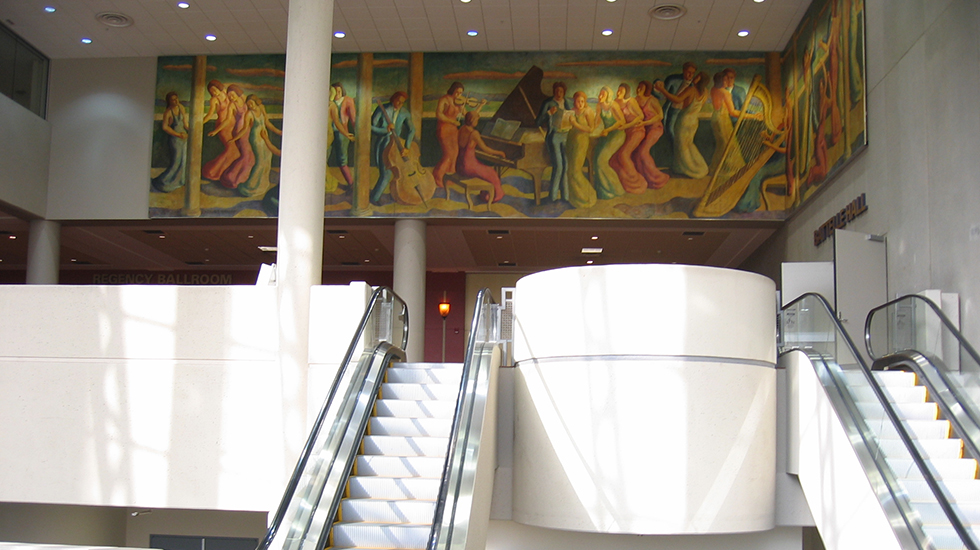 Only visible for four years, 1934-1938, the controversial mural by artist Emerson Burkhart was not visible again until sixty-years later when approximately 1,000 art students at the Metropolitan Education Center (an arts impact Columbus Public School) completed six years of work in removing nearly 1,000 square feet of soluble calcimine paint from the surface in their spare time. All the student work was under the instruction of, and supervision by, professional art conservators. The Burkhart mural MUSIC was re-installed in the Greater Columbus Convention Center. A grand celebration of this event, on the evening of March 22, 2005, highlighted the success of the cooperative project between professionals and students and the multi-disciplinary educational benefits a study of art can have in a public school environment. Several years after the “whitewash,” Newsweek (September 6, 1943) reported a latent indignation growing over the destructive act among the art-loving local public and a national interest then ensued through editorials and reader letters published in Art Digest and Art News.

Restoring the mural Music, a task of enormous scale, was only made possible through the dedication and hard work of many – especially the students, faculty, and administration of Ft. Hayes Metropolitan Education Center. Approximately 1,000 students worked over a six-year period to remove the layers of overpaint and restore the painted surface of the mural. As these high-school age students uncovered the hidden mural, they were the first to see the mural after the last high school students saw it before its covering in 1938. Following overpaint removal, the students were educated in the techniques and ethics of inpainting and carried out most of the inpainting on individual canvas sections at a time set-up in their school. The students were trained and supervised by professional conservators from McKay Lodge Fine Arts Conservation Laboratory, Inc. in Oberlin, Ohio. The work of the students was valued at over $185,000.

The mural restoration was integrated into several art classes at the Ft. Hayes school, where every ninth grade student was taught about the importance of regional artists. Art students also studied Depression-era artwork produced by the Works Progress Administration (WPA), and they explored the art and science of art conservation. The mural was also used as a springboard for classes in dance, music, social studies, and science.

McKay Lodge, Inc. was been involved with the mural for over ten years, beginning with an overpaint solubility assessment in the 1990’s and then, in 1996 when the City of Columbus hired the company to remove the mural from its location over the stage, 25 feet from the auditorium floor, in a brief window of opportunity just ahead of demolition of the old school. No small job in itself, the removal was made difficult because of the very strong adhesive, hard and toxic, a paste mixture of linseed oil and the white pigment lead carbonate. The mural was removed within lead abatement procedures and safeguards ongoing within the deserted building at the time.

Following estimations for the conservation treatment of the mural which indicated prohibitive costs, McKay Lodge, Inc. president Robert Lodge suggested that the most time consuming work, removal of the water-soluble calcimine, could be accomplished by volunteers after some training. This suggestion was taken and made into a reality by historic preservationist Nancy Recchie of Benjamin D. Rickey & Co. in Columbus, the person most responsible for garnering the interest of then City Council President Michael Coleman and arranging with Fort Hayes school for student participation. Considering the mural’s original location in a Columbus high school, it was most fitting for Columbus high school students to take a principle role in restoring it to view. This preservation/education collaborative project has been supported by: 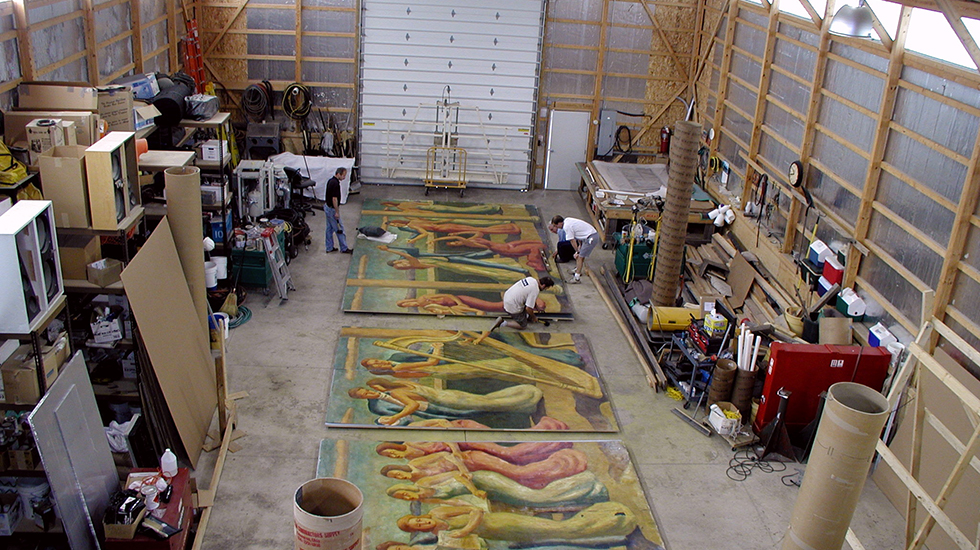 The mural Music (1934) by Emerson Burkhart, not seen for the past fifty-three years after its “whitewash” in 1938, has been ordered removed from old Central High School by the City of Columbus just ahead of a planned demolition of the building. The city hired McKay Lodge Conservation Laboratory, Inc. to accomplish this emergency work. McKay Lodge, Inc. is known in Columbus for safely removing four 25 foot tall wall paintings from the rotunda of the State House several years ago during the building’s period restoration.

Previous to the Burkhart mural removal, McKay Lodge, Inc. determined during a hired assessment project that the painting under the wash of white paint and additional coatings applied of the years was likely to be in good condition. In addition, McKay Lodge, Inc. demonstrated through tests the feasibility of removing all the coatings from the original artist’s painted surface. Though the City of Columbus had no location to redisplay the mural, the hope for its salvation and eventual public display once again spurred removal effort. 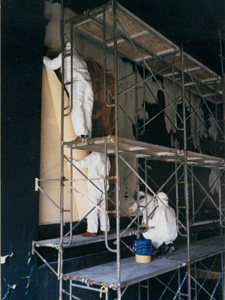 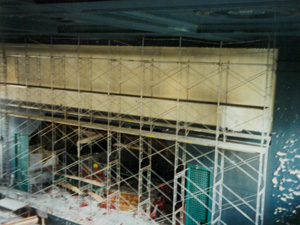 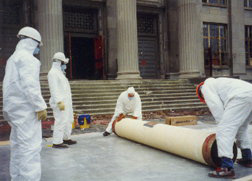