Queen Catherine of Braganza has taken up residence at the Butler Institute of American Art. The heroic scale (almost 12 foot tall) plaster maquette is a creation of sculptor Audrey Flack who is well known for her monumental scale realistic figural sculptures many based on female themes.

Our wrangling of the two elements safely within the Museum confines was not an endeavor for the faint of heart. In one instance critical clearances were down to the half inch. Complicating the move through the museum spaces was the polished marble floor. Ensuring that the weight of the skirt element was distributed in such a manner that there was no chance of cracking the relatively soft marble tiles was of prime consideration.

Once the skirt and torso elements were moved into the location where the artwork is to reside, we erected our scaffold towers and a beam was placed across the tops of the towers to provide a lifting point. Two hoists were attached to the beam and the torso was lifted into the air high enough to roll the skirt element underneath; then the torso was aligned with the skirt and lowered into position. The joint between the torso and skirt was touched up with new plaster and colored to match the surrounding surface.

The successful installation of Queen Catherine of Braganza was well received by the museum staff. Getting this artwork on display was highly desirable. 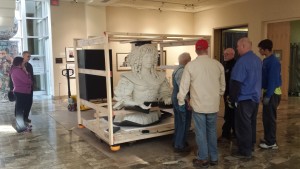 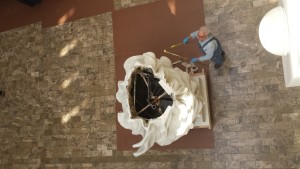 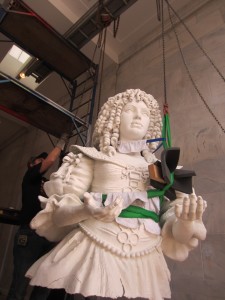 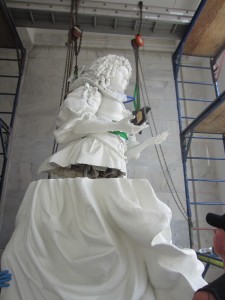 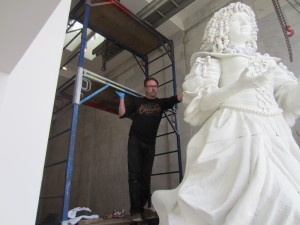 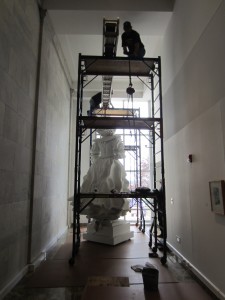 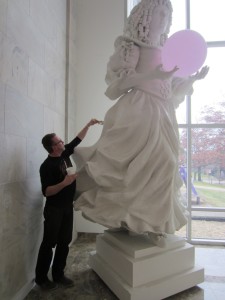 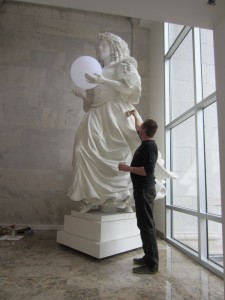