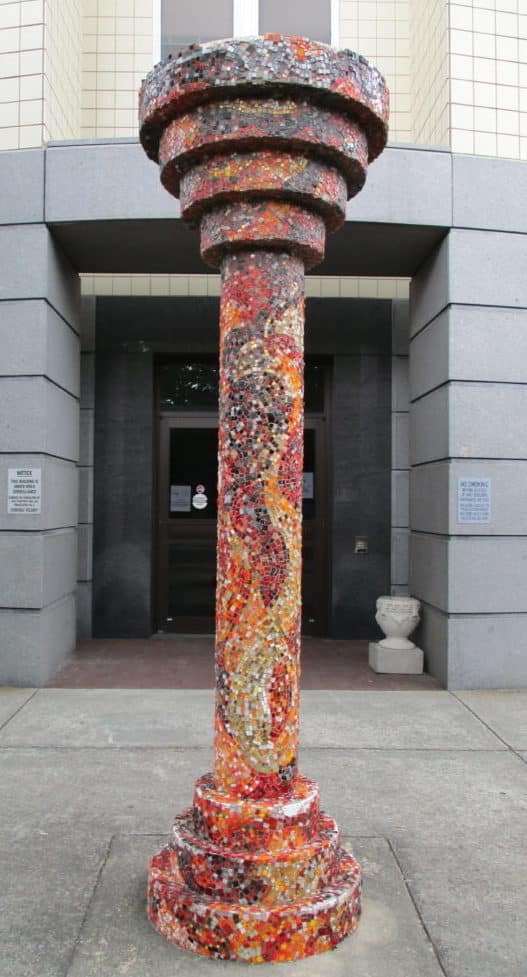 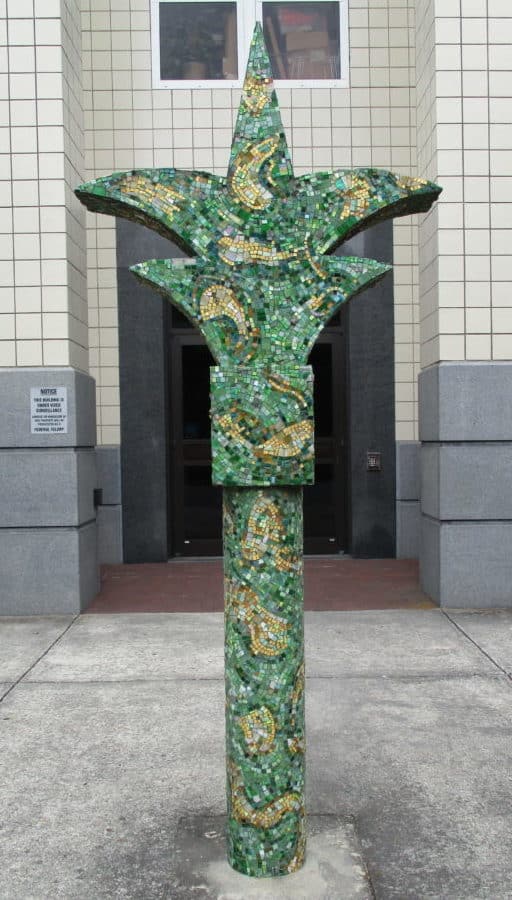 Conservators Christina L. Simms and Emmett Lodge traveled to the deep South this May for the conservation treatment and relocation assessment of Two Worlds Apart, 1991 by artist Ned Smyth. The mosaic artwork currently resides in front of the Juliette Gordon Low Federal Building, located close to the Savannah College of Art and Design.

It consists of two glass and stone mosaic sculptures, each a hollow plastic column covered with colorful tesserae set in place with thinset mortar.  The red column is in the shape of a capital and the other green column is reminiscent of a palmetto motif. The colors red (culture) and green (nature) were selected to represent life and growth, and the separate sculptures signify “the balance between two coexisting worlds- nature and culture- a fragile relationship between two powerful forces” as described on one of the two informational plaques. The columns are between nine and ten feet in height, and they are installed in front of the building on the sidewalk approximately half of a city block apart from one another.

Over the years the outdoor mosaic sculptures have been adversely affected by the elements. While people north of the Mason-Dixon line, think of the South as perpetual summer, Georgia still has a freeze and thaw cycle which has impacted the artwork. Warm, humid weather in the warmer months also permitted biological material to grow on the surface of the sculptures, creating a green color in the mortar joins. The artwork is also located in a public square so damage from visitors climbing on the pieces, or taking some of the beautifully colored tiles as a souvenir has resulted in additional tile and mortar loss. 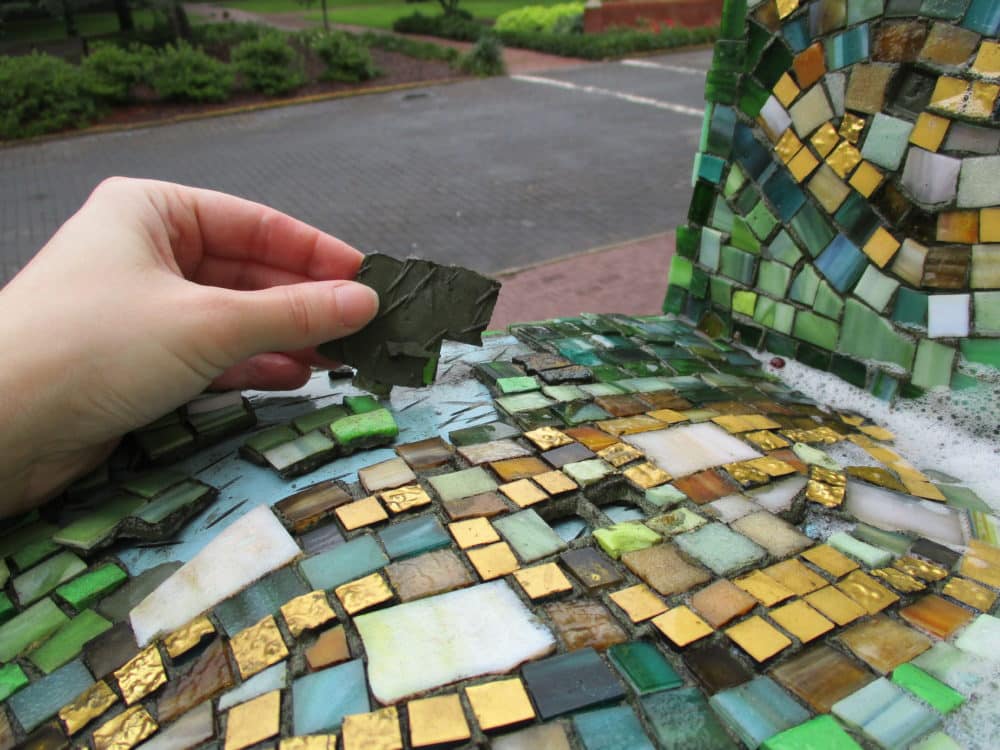 During treatment shows a detail of loose tiles, mortar, and biological growth

The mosaic conservation treatment was intended to first stabilize the piece, and to also improve the aesthetic appearance by replacing missing tiles. First the surface needed to be prepared.

Each column was washed with a mild detergent applied with soft-bristle brushes and rinsed with water. Biological growth was removed with manual action with brushes as possible, then rinsed again with water.  A significant amount of the mortar and tesserae separated from the substrate while washing. For example, the uppermost proper left surface of the green column (if viewed facing the building) had sheets of loose mortar and insecure tiles. Loose tesserae were retained to reattach later. 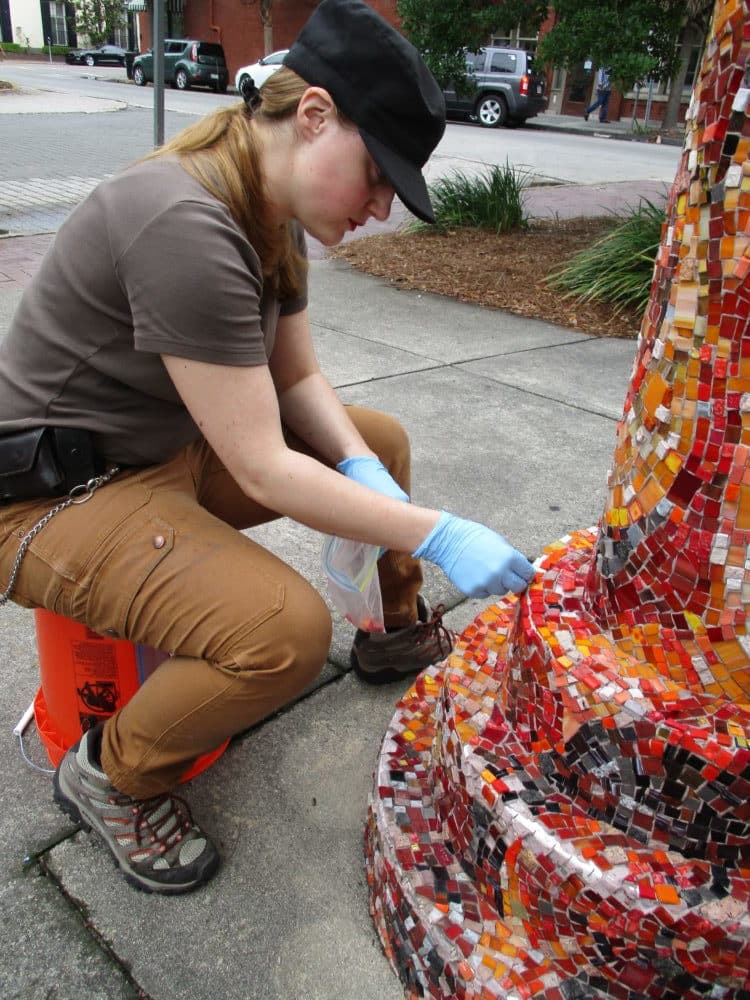 Conservator Christina L. Simms lays out tile to ensure design and color are accurate before attaching the new tesserae

All original loose tesserae were used to recreate losses, but there were still areas of loss. This issue was anticipated since McKay Lodge Conservation had completed a previous condition assessment for the artwork. Tesserae were purchased beforehand from the Ned Smyth’s original fabricator, Stephen Miotto, who now operates Miotto Mosaic Art Studios Inc. Some additional glass tiles were required to complete the bottom of the red pillar that were purchased locally during treatment. Before treatment, tesserae were arranged to complete the existing color and design. 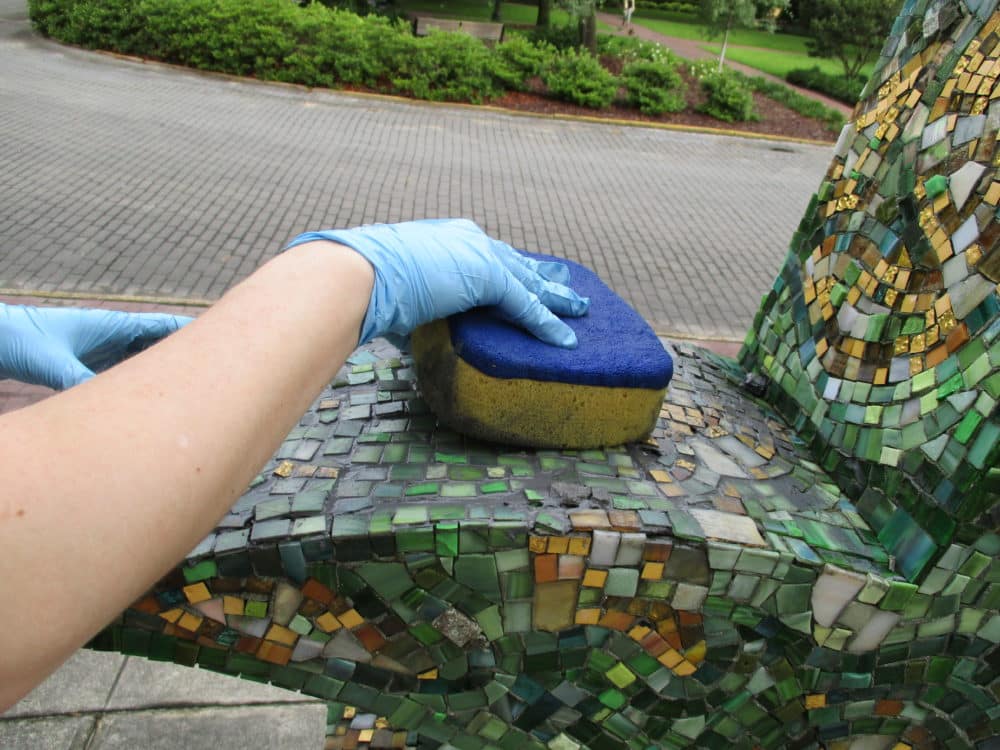 New mortar is applied to secure the tesserae

Relocation was another part of this treatment since Ned Smyth’s artwork is installed in front of a building that is set to be demolished in the near future. At the time of the assessment, few fabrication process images and installation images were available.

So McKay Lodge Conservation had to estimate the safest way possible to remove the artwork. This was done by reviewing previous records of the artwork, new proposed location, and engaging a local concrete contractor. Relocation recommendations were then provided with the final treatment report and images.