At McKay Lodge Conservation we not only keep a “vigil” on outdoor sculpture maintenance in the Greater Cleveland area, but in America’s Heartland too. Our conservation team traveled to Oklahoma City to deinstall the kinetic sculpture Vigil, 1978 by artist William Scott during the fall. During the winter, the sculpture received a complete conservation treatment at our conservation facilities in Oberlin, Ohio. 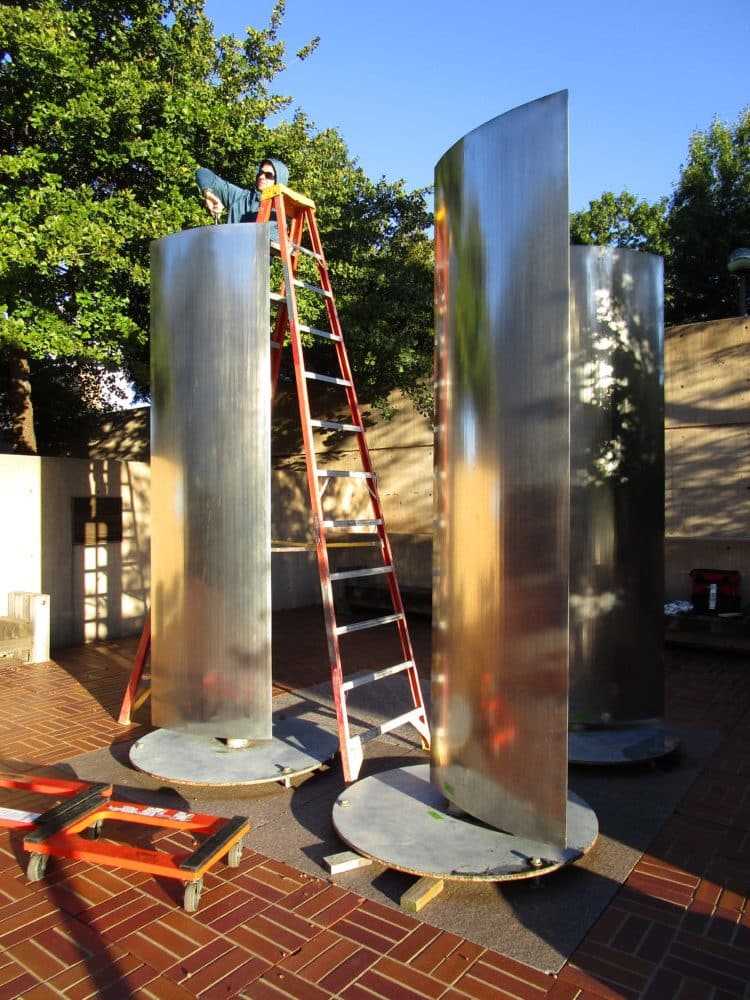 The artwork is generally located on the grounds of the Alfred P. Murrah Federal Building Plaza and Parking Garage. It features vertical elements made of stainless steel that are mounted onto painted round bases. These components are attached on a pole, allowing them to pivot 360 degrees with either the wind or by the hand of a curious visitor.

From years of exposure and natural aging, the artwork suffered some condition concerns which required conservation treatment. The primary issue was a failure of the attachment method by which the vertical pole was affixed to the round base. The pole was loose and would move substantially in any direction, causing the wing to tilt to one side and not swivel an even 360 degrees as it was intended by the artist. A second major issue was a substantial deterioration of the base paint, including extensive chalking, peeling, and minor corrosion of the metal substrate. Additionally, all wings produced noise while turning.

The treatment required the work to be removed off-site as well as the specialized skill and equipment at McKay Lodge’s conservation lab just outside of Cleveland, Ohio. The sculpture was disassembled to ensure that all of its components did not exhibit wear and that they were structurally sufficient.  While some parts were in excellent condition, others required replacement. All components and bearings were cleaned and lubricated as needed; this is an especially important step for the treatment of kinetic works of art. It was also found that during an initial condition assessment that the screws which attached the elements to the pole as well as their top sections had become loose, likely due to the constant rotation. 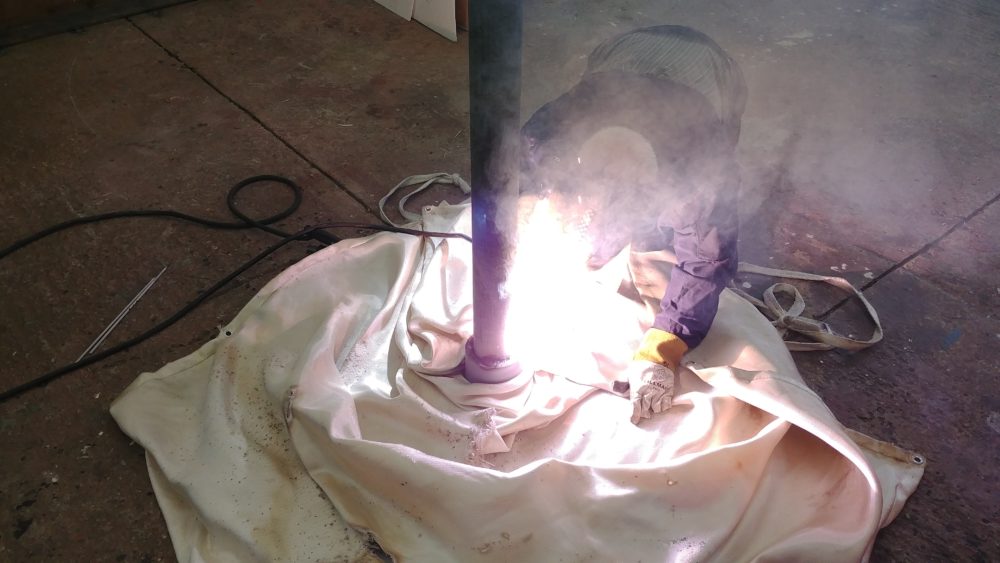 Changes were therefore made to how the vertical elements were mounted. It was determined that the safest and best method to remount the elements was to use hot metal joins. The top sections were reinforced with tack-welds, but their original set-screws were also retained for reinstallation.  Welding was completed by our Senior Conservator of Sculpture, Thomas Podnar, who has carried out kinetic sculpture conservation in the past. The modifications were ideal as they made no apparent or adverse impact on the work of art, but imparted greater structural integrity while still allowing the elements to freely rotate. 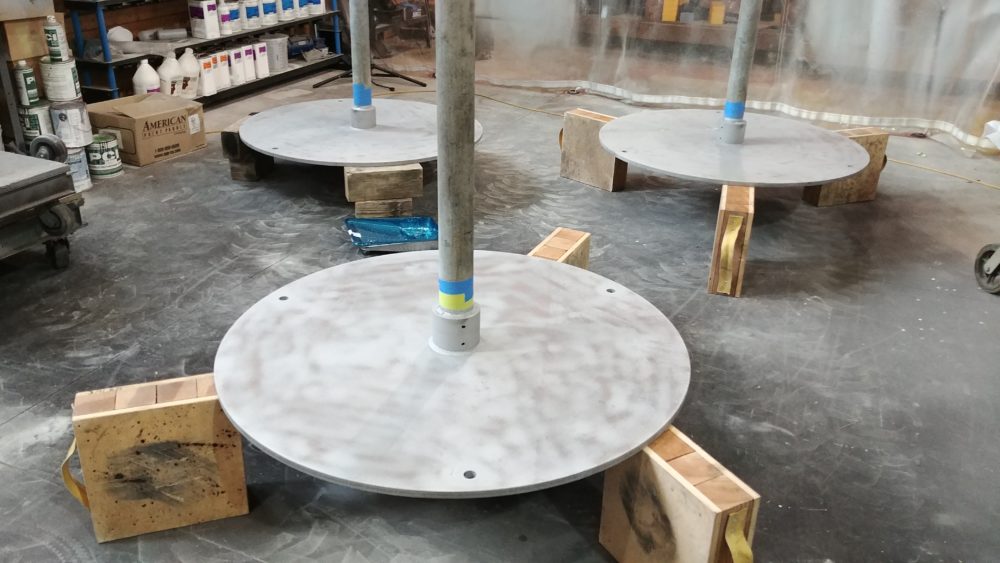 Recoating of the bases during treatment

Since the original base paint could not be salvaged and corrosion had already begun, the surfaces were abrasive-cleaned to bare metal. The step is necessary to ensure proper adhesion of primer and top coatings of paint. For the bases, a high-quality, water impervious coating was applied to the substrate with a roller. Once the primer was completely cured, a final coat of polyurethane was applied with a HVLP sprayer. A polyurethane paint in general has excellent durability and color retention which is ideal for an artwork that sustains a lot of interaction from the public and endures the intense prairie sun of Oklahoma.  Sculpture recoating was performed by Emmett Lodge, a certified Industrial Coatings inspector and seasoned applicator. This in-house service allows McKay Lodge Conservation to offer affordable sculpture painting services that are relatively unmatched in quality and price in art conservation.

The kinetic sculpture was safely packaged for its journey back to the federal building. It was reinstalled in its original location, using the original female-ended mounting studs which protruded from the plaza. These studs were zinc plated and appeared to be in good condition. Stainless steel hardware was used to bolt the sculpture to the studs. The wings were slid over the poles at ground level with the entire sculpture in a horizontal position. Once the wing was set onto the bearings and the top bearing was bolted into position, the sculpture was raised to vertical position and bolted down. All three wings rotated freely after reinstallation. Special instructions were provided to the building for maintaining and keeping moving components in working order for many years to come. 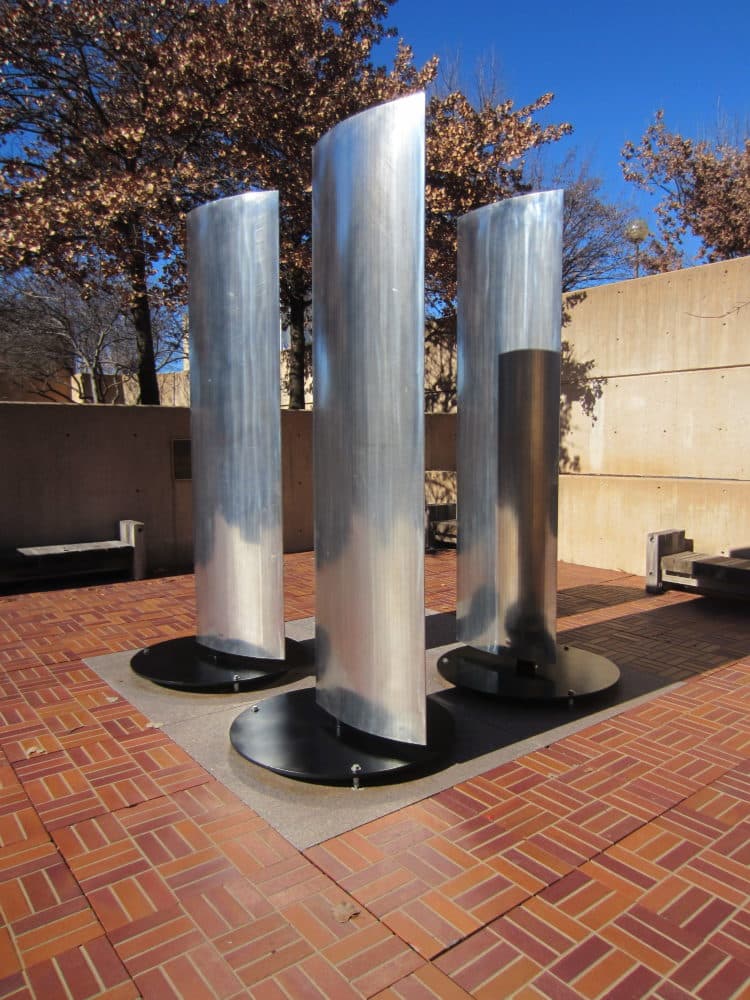