August 2004: An allegorical ceiling mural, decorative painted walls, sculptures, and 19th century oil paintings once adorned the interior of the 1899 Erie City and County Public Library in Erie, Pennsylvania adjacent to another historic building, the 1939 Federal Building. Years ago, the Erie Library building was vacant, cold, and all the wall surfaces coated with black soot.  The oil paintings and moveable sculpture were relocated to a new library building on Front Street. 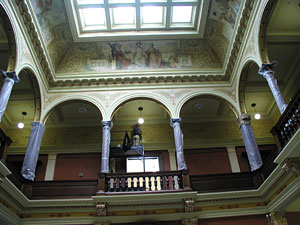 View of the second floor level with its decorative painted walls and the allegorical ceiling mural.

The ribbon cutting ceremony on August 25, 2004 celebrated the completed preservation of the landmark building through its acquisition into a new federal complex that joined both the 1899 library with the 1939 Federal Building.

The decorative painting surrounding the rotunda is attributed to Henry Meixner, a scenic painter in New York and Chicago.  In Chicago, he worked for Crossman and Sturdy and painted scenes for the Chicago Civic Opera. 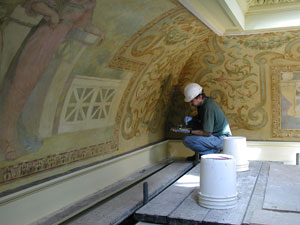 The four curved sides of the ceiling around the skylight depict in allegorical personifications Literature, Poetry, Science and Art. The building was designed by the architectural firm Alden & Harlow of Pittsburgh.  These architects also designed the Carnegie Institute in Pittsburgh where they worked with the artist Elmer E. Garnsey (1862-1946).  Garnsey painted the ceilings in the Erie building too. He, with his son Julian, created many decorative murals in significant buildings.  Among them are murals in the Boston Public Library, the St. Louis Public Library, the Art Institute of Chicago, the New York Stock Exchange, Library of Congress, Yale University, the Richardson Memorial Library in St. Louis, the Alexander Hamilton U.S. Custom House in Bowling Green, New York City, and the State Capitols in St. Paul Minnesota; Des Moines, Iowa; and Madison, Wisconsin. 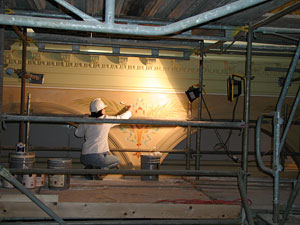 McKay Lodge Art Conservation Laboratory, Inc. was the conservation contractor performing the preservation and restoration treatments for all the fine art, murals, sculpture and artistically painted surfaces in the historic library over nearly a two-year period.  Included in the Erie Library mural conservation project was the restoration and return of two of the easel paintings which originally hung in the building, Echo by Gustave Mosler and Silent Woods by Roswell Morse Shurtleff.  The fine American frames for these two 8 foot-long pictures were restored and gilded by McKay Lodge, Inc. as well. 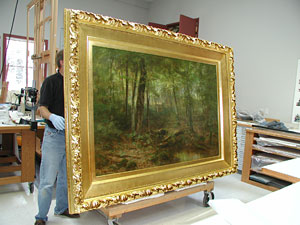 Silent Woods by Roswell Morse Shurtleff being wheeled to the packing room, after its restoration and framing, for delivery to the restored Erie Library.

Millet’s murals and the postmaster’s elegant office remained intact even after the post office moved to a larger location in 1934.  The Collector of U.S. Customs became the new tenant of the corner office on the second floor and remained there until 1955, when more space had to be found for the federal courts.  The canvas murals were peeled from the walls and soon all traces of the postmaster’s office vanished, making way for a courtroom.