The red of some Alexander Calder outdoor painted sculptures have, unfortunately, been repainted with some fanciful variations of red. When the original red color can not be known for certain from archival information, paint cross sections, or other forms of documentation, there is a fairly well documented history and preserved samples of the “Calder Red” color seen and accepted by the artist, specified by the Alexander Calder Foundation for decades, and used for Stabiles in the U.S. since at least 1968 to use as a reference. 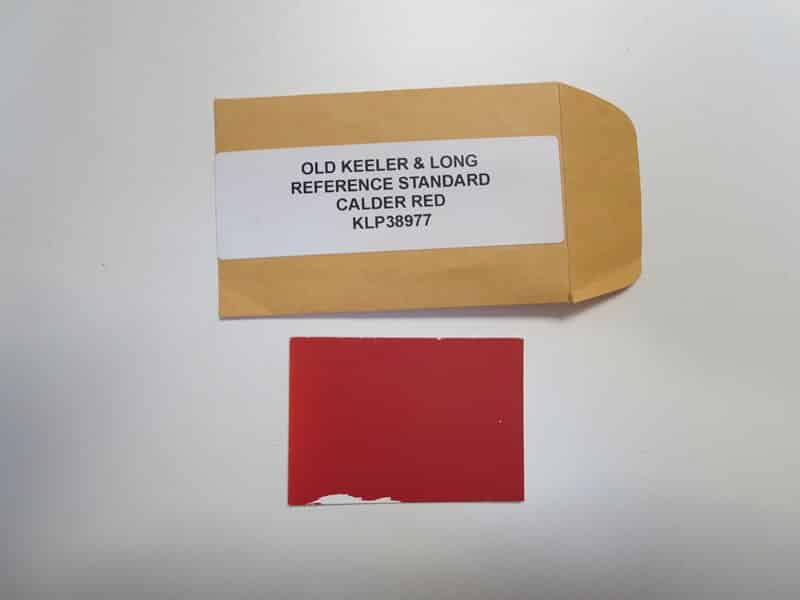 (Above) The only surviving color reference to the red color (Calder Red – KLP38977) Alexander Calder personally specified and approved for production by the Keeler & Long company. That company provided this Calder Red, a black, and an off-white the artist also approved, for repaintings of his sculptures in the United States and in other countries. The K&L company gave their last color reference card used for production of batches of the color to McKay Lodge company president Robert Lodge when they ceased production of Calder Red. There were originally two identical reference color cards at the K&L plant to assure color consistency batch-to-batch.

A different Calder Red  color is being specified and used for repainting sculptures by Alexander Calder, it may be valuable to explore some of the history of the color used on Calder Stabiles in the United States since at least 1968. The color has had decades of fairly well documented and consistent use.

In cases where the original “red” can not be documented for matching in any repainting, using a “Calder Red” that differs from the pervasive and long recommended color should come with a hefty amount of argument in its favor.

We recently ordered some of the “new” Calder red specified by the Alexander Calder Foundation and it is quite different from the well documented legacy color used for decades. It is not the characteristic vermilion or “Chinese red” but is darker and closer to Ronan’s Signcraft Red. We have no information on the reason for this change in the color and wonder how many of Calder’s Stabiles may have been altered by it.

We present here, in a PDF document, some “Notes” on that history, made up of research, observations and some oral history from numerous interviews with people associated with the color.

This document was last updated in 2012 and so some products information may be currently out-of-date.

Click the image below to read the full document (some products information may now be out-of-date). 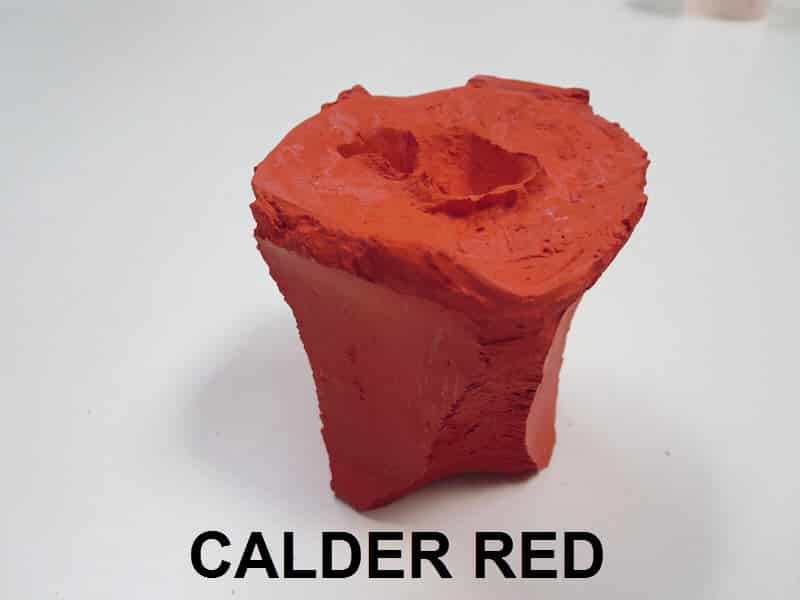 SELECTED EXCERPTS FROM THE REPORT

Professional Associate, the American Institute for Conservation of Historic and Artistic Works (AIC

This document is incomplete and is not intended to offer a comprehensively researched study of the orange-red color and its paints either specified, intended by, or applied by Alexander Calder on his various stabiles (the mobiles are excluded entirely). As the document contains some unsubstantiated information based on recollection (oral history), opinions, and some conjectures, it is not suitable in its present form for publication.

As  would be expected to be well known by the readers, the color widely known as “Calder Red” is the characteristic matte orange red color (somewhat similar to vermilion or “Chinese Red”) used and specified by the artist for parts or the whole of his stabiles, many of which are monumental and outdoors, of the period 1963 to 1976. Earlier use of this color, or variants the artist may have used, was not researched by the authors. The artist also used the darker, standard red color “Signcraft Red” (and other colors) produced by the Ronan paint company located in the Bronx, New York, for components of his mobiles. The Ronan paints are flat, quick drying decorative paints known as “Japan Colors” not suitable for enduring outdoor exposure. Please recognize that the information in this document does not imply that there were not variants in the red color of paints used and/or approved by the artist for the stabiles. (Note 3)

(3) A copy of a letter once in the possession of Robert Lodge (misplaced or lost) from Klaus Perls (Perls Gallery, NY) has Mr. Perls stating exactly or in effect in regard to Calder Red: “he was not too particular about an exact color.”

The Color of FLAMINGO and LA GRANDE VITESSE

The two long-term paint sources for the artist’s signature orange-red color known as “Calder Red” used on his stabiles in the United States as well as shipped to Europe for use on stabiles there were (1) the Keeler & Long Company, who the artist’s red color in a matte, long-oil alkyd paint for the 1973 (Note 4) FLAMINGO in Chicago, and (2) Guardsman Chemical Company, who matched Calder’s same preferred red color, also in a matte alkyd, for the earlier commissioned 1969 LA GRANDE VITESSE in Grand Rapids, Michigan. (Note 5)

(6) Told to Robert Lodge long ago by a former executive of Guardsman Chemical Company whose name has been forgotten.

To be fully accurate, the first coating of Calder Red for LA GRANDE VITESSE was paint that shipped with the sculpture from France and was applied to the shop-primed steel after its erection by brushing. The paint was referred to as “the definitive color” in an English translation provided with the French original letter. (Note 7)

“We have noted your agreement with regard to the colour of the ground and the definitive colour which you will apply on the premises.”

“To that purpose we are informing you that you will find in the cases not only the quantity of paint necessary for the definite (red) but also a certain number of jugs containing the ground paint permitting you to make some retouches which you believe to be necessary on the primary coats.”

The first paint for overpainting the sculpture matching this color was provided by Ford Paint and Varnish Company, founded by former U.S. President Gerald Ford’s stepfather in 1929. (Note 8)

(8) Told to Robert Lodge long ago by a former executive of Guardsman Chemical Company whose name has been forgotten.

Presumably, having no evidence, the Ford Paint and Varnish Company matched the color of the paint shipped with the sculpture and may even have had the shipped supply of dry pigments. This color formula was passe