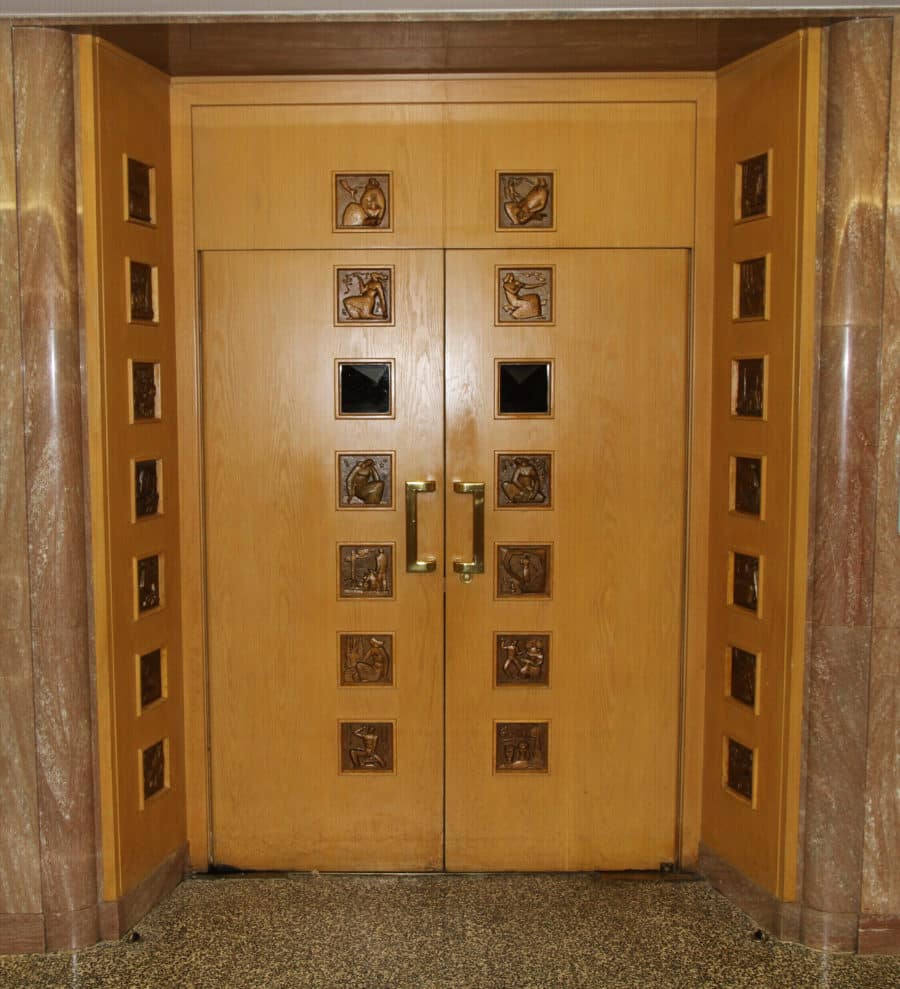 As part of a large ongoing project at the E. Barrett Prettyman United States Courthouse in Washington, D.C. our conservators are restoring the many original interior courtrooms’ entrance veneered double doors. While aesthetic and structural repairs are being made on-site, the 572 decorative bronze relief plaques which adorn these doors have been brought to our Cleveland area Art Conservation facility in Oberlin, Ohio for conservation treatment. Plaques will be cleaned using a process known as Vapor Blasting, but more on that in a second…

Over the years, the plaques have had multiple “restoration” campaigns leaving them dark in appearance with layers of yellowed coatings. Many of the plaques also exhibited green corrosion of the bronze metal surface. 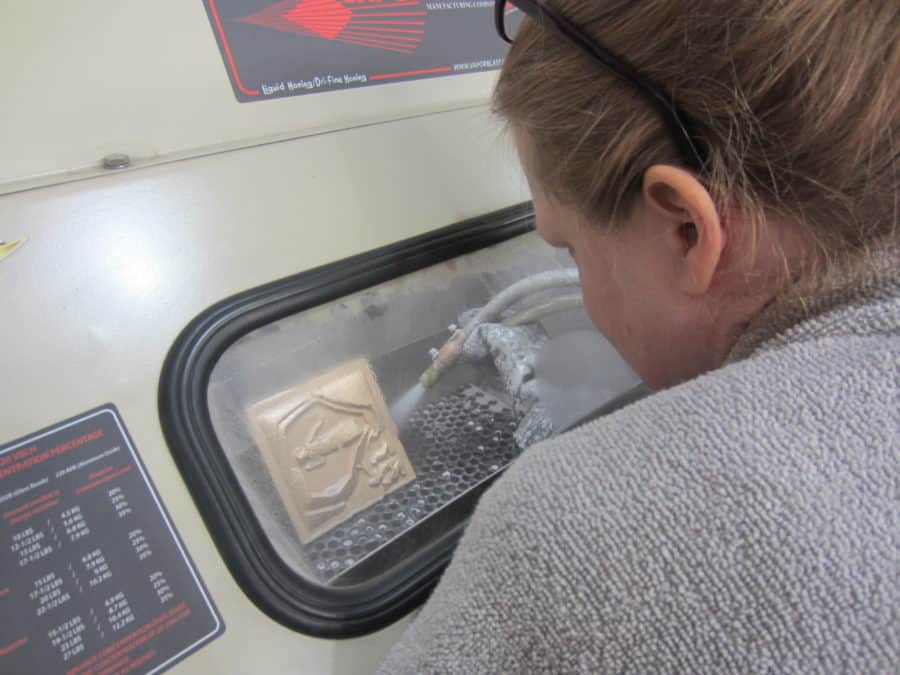 After careful research, testing and deliberations, it was decided that the best method to remove corrosion, accumulated failed old coatings and soiling (probably tobacco smoke) was to reduce these surfaces back to bare bronze and start over.

Dee Pipik, our multi-talented conservation assistant and gilder, is using our vapor blasting/water honing equipment to complete this treatment. Our vapor blasting system is self-contained and dust-free, keeping the operator and artwork safe.

But what exactly is Vapor Blasting?

Vapor Blasting is known by many names such as wet blasting, wet abrasive blasting, slurry blasting, dustless blasting, and liquid honing. It is not a new process; in fact, its beginnings can be traced to the mid 20th century. Today it is used to remove grease, paint, coatings, scale, and small burrs from manufactured components as well as to create a satin finish on a wide range of materials.

This high quality surface finishing method works by using a very fine abrasive mixed with water which is applied with compressed air pressure to a surface. The resulting vapor blasting slurry is a more gentle process than other types of dry media blasting since the water-based slurry flows over a surface rather than directly impacting it. The water flushes away debris, and it is able to flow into hard to reach areas like recesses and threading. The abrasive media is also less likely to become embedded in softer materials. After the Vapor Blasting process is complete, the final surface is left with a fine finish.

In the case of the bronze plaques, the left plaque before Vapor Blasting has yellowed coatings and a dark color which make the relief difficult to read. The newly treated plaque reveals the bare bronze which is now free of surface contaminants. Surface preparation complete, it is now ready to receive a patina and protective coating, returning the plaque to a state that is closer to the original color and sheen. They will match the mock-up created for and approved by the General Services Adminstration (GSA).

But stay tuned: there are still 500 or so more plaques to go.