If you are ever driving down Route US 25 E, think of General Isaac Shelby. Though born in Maryland, he spent much of his life in Kentucky. 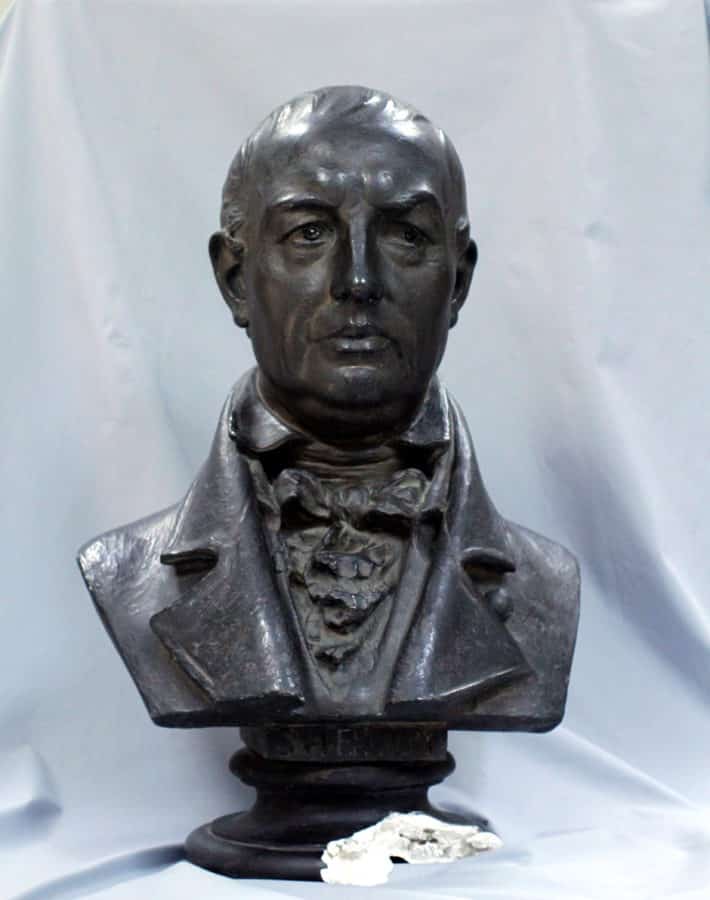 At McKay Lodge Conservation we also perform fine arts conservation treatment of small artifacts and dimensional works of art, and one such object was the restoration of a plaster bust of Isaac Shelby (1750-1826) completed by Objects Conservator, Christina L. Simms.

Shelby was the hero of the Battle of King’s Mountain during the Revolutionary War, served in the Maryland and North Carolina state legislatures, and was the first and fifth governor of Kentucky. During his time as governor, Shelby authorized the widening of the Wilderness Road from Cumberland Gap to Crab Orchard (much of which is Route US 25E) for better wagon travel. In 1780, he was granted 1,400 acres for a family homestead, some of which is now the Isaac Shelby Cemetery State Historic Site.

For the military hero, statesman, and frontiersman it seems only fitting that someone would sculpt his likeness. This bust of Isaac Shelby suffered an impact or fall at some point in its history, which had been repaired. When the repair failed, McKay Lodge Conservation was contacted for its art conservation services, and thankfully we had most of the pieces. 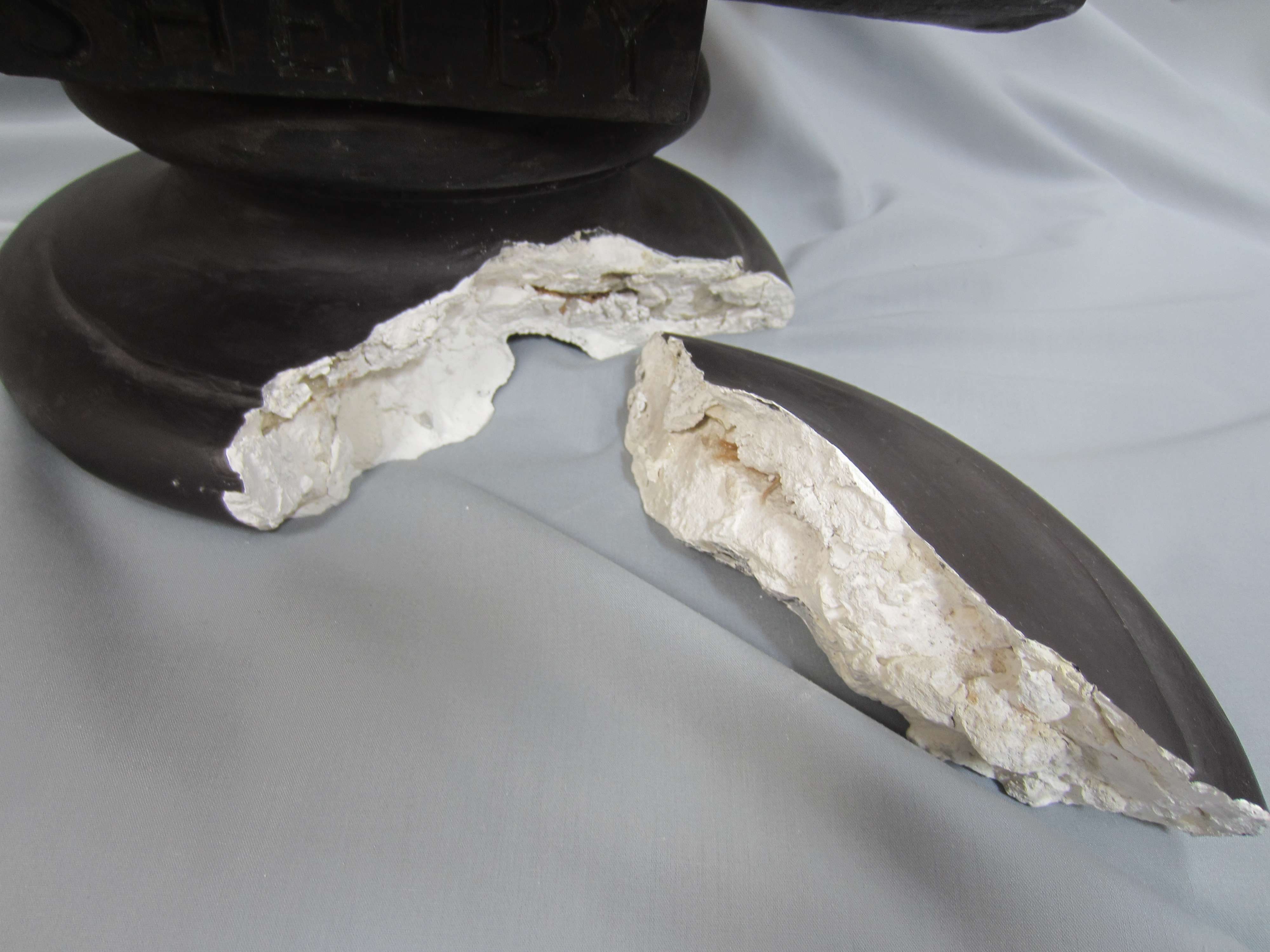 Conservator Christina L. Simms, skilled at object conservation, first performed an examination and documented the condition in writing and by taking before treatment images. She then cleaned the previous adhesive from the break edges. It was apparent if the former repair failed that a conservation appropriate adhesive did not provide enough strength alone; it was decided to pin two fragments together. One method is to attach the break edges together, then embed the pins.

This was done by applying a dilute acrylic resin to the break edges as an isolation layer, followed by another application of a thicker acrylic resin mixture. 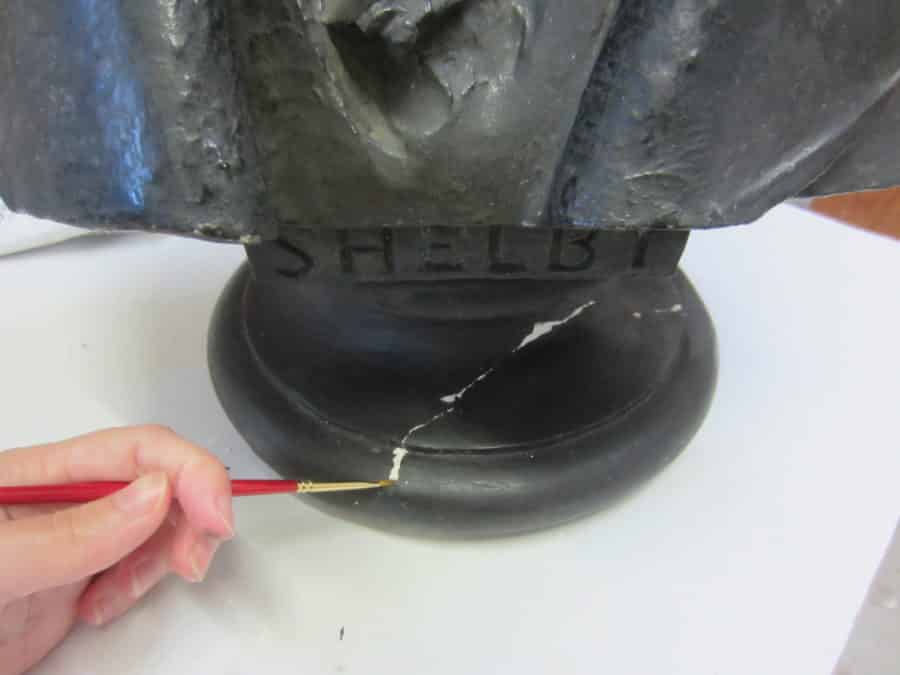 The break edges were quickly joined together and clamped. Once dry, two approximately 1 inch by 1/2 inch holes were drilled in the base of the plaster pedestal across the break edge to accommodate two stainless steel pins. An isolation layer of dilute acrylic resin mixture was applied to the surface of the holes for isolation purposes. The pins were then set with epoxy providing the strength needed to ensure a successful and lasting repair.

Remaining losses near the break edges on the display surface were also filled with a conservation-grade spackling compound. These areas as well as minor paint losses in prominent features such as the nose and eyes were inpainted with acrylic paint. After treatment, completed repairs are not readily visible at a proper viewing distance.

If you want to learn more about American historical figures like Issac Shelby or more Kentucky history visit the Kentucky Historical Society.