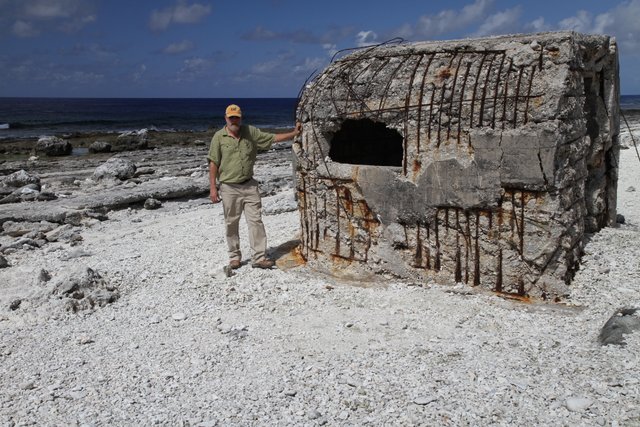 The abridged survey Report with images can be found here: WAKE ISLAND REPORT

On December 31, 2010, McKay Lodge, Inc. president Robert Lodge completed his study for the preservation of historic Japanese World War II ferro-concrete structures on tiny Wake Atoll in the Pacific area of Micronesia. Commonly referred to as “Wake Island,” this is just one of three islands that make up “Wake Atoll.” Work began in September 2010 with a two week field survey of the three islands that make up the tiny coral atoll – the rim of an old volcano sitting a bit above the water – and concluded with a materials and methodology prescription in a report for work to be carried out by civilian contractors on the atoll maintaining a U.S. Air Force base of operations there.

Following the survey, Lodge conducted a training class in ferro-concrete wall stabilization methods and materials with the base contract personnel.  Materials for this class were shipped by McKay Lodge Conservation Laboratory from Hawaii ahead of the trip. 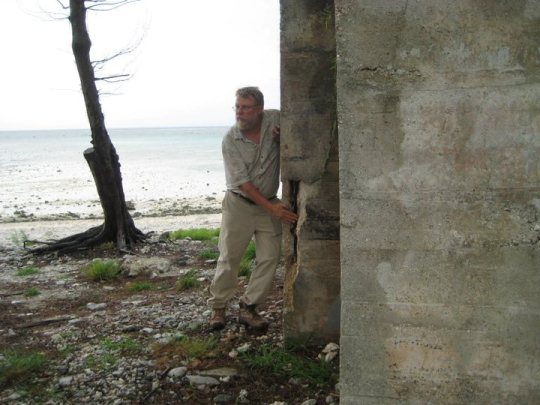 The atoll is famously NOT OPEN for visitors by the public.  Civilians having official business there can come and go only once every two weeks on a combined passenger/cargo plane from Honolulu.  They show a movie and the food is good. The flight to and from Honolulu is 3-4 hours depending on which way you are going.

There was a dorm for visitors, housing for the civilian contractors, a dining hall serving two menus of unbelievably hot spicy Thai and the usual “American” foods  amazingly varied and nicely prepared by the chiefs three times a day, and there was one doctor and a nurse.  A small library, open 24 hours every day, was neatly kept but rodents had eaten the card catalog – so you had to just browse.

Living creatures on the island, aside from humans, are birds, hermit crabs and rats. That’s it. Well small lizards too. The birds stay safely where the government wants them, on the ecological “reservation” maintained and protected just for them. Driving at night involves dodging an enormous population of nocturnal rats and slow moving hermit crabs, crabs that for some reason seem to have an urgent but painfully slow need to leave the beaches and cross the one, single road on the atoll to get somewhere, who knows where, every night, again and again.  A “crunch” while night driving is not a pleasant experience.  Rats we can figure out more easily – they have a fast scurry back and forth for real, rumored and, very probably, picturesquely imagined tiny bits of rat-suitable edibles.  Night rat hunting is a big island sport, and a necessity.  Cats were considered for rat control but ruled out on the basis of dangerous ecological intervention (like which could be a worse over-population problem?  Well, let’s leave that one alone).

The bowling alley was destroyed by a 30 foot “rogue wave” that swept over the islands several years ago.  Bowling is now available only on the remains of a 1930’s Pan American Airways ramp for their China Clipper planes and that is just a short half hour kayak trip away from the “downtown” to an area near mass Japanese cremations and mass slaughter and burial of Americans on the island. 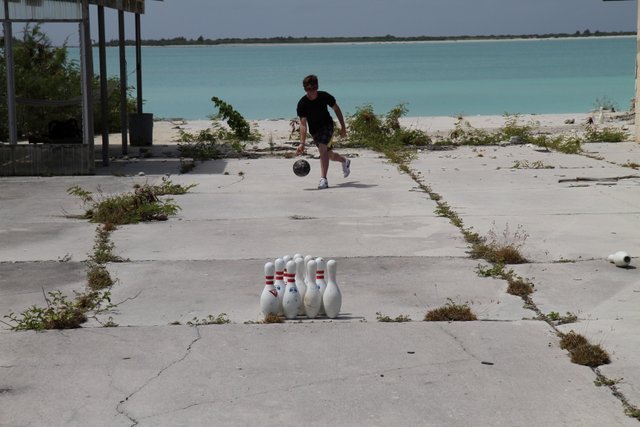 The Americans, construction contractors for the Marines and for Pan American Airways, built the over 100 concrete structures for the Japanese as POW laborers, then, when work was done, all were slaughtered. Ten pins are available as well a few bowling balls on the concrete. Re-setting pins by hand gets tiresome quickly.

For two weeks, Robert Lodge and the company’s archaeology intern, Ricky Workman (BA, College of Wooster, Ohio), trekked in the heat, trucked in a manual shift Ford Ranger pick-up, and kayaked to study close to 100 cement and coral pillboxes, blockhouses and gun placements of the Japanese who won over the island from our U.S. Marines in December 1942.  This was an event that stirred the U.S. public enormously due to the valor of the marines in fighting against incredible odds and relentless airpower and ship firepower.  The surprise Japanese attack and invasion of Wake Atoll took place on the very day following the surprise attack on Pearl Harbor.

These structures were built of cement, coral, reinforcing steel and seawater.  The chlorides in the seawater caused extreme corrosion and then spalling of the concrete structures.  Storms tossed some around and some ended up in the ocean from beach erosion. 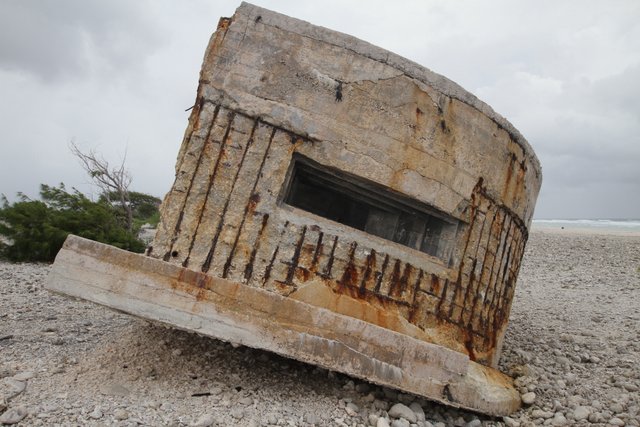 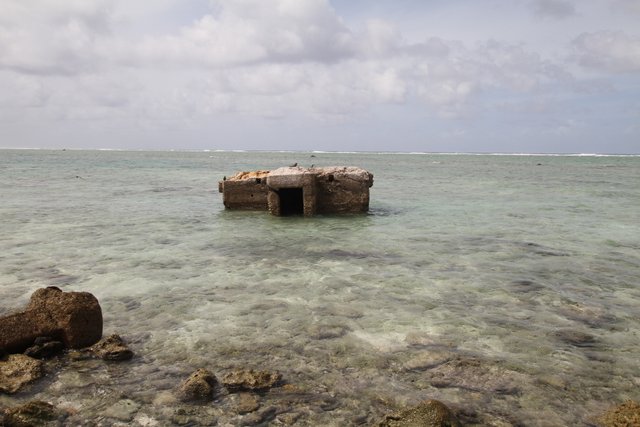 Most Americans today have forgotten or never knew much about Wake Atoll. It is a small three-island atoll sitting in the Pacific Ocean 600 miles north of the Marshall Islands and 2,300 miles west of Honolulu.

Wake Atoll became a symbol of hope for Americans when its defense force repulsed Japanese attacks shortly after Pearl Harbor. When Japanese forces captured Wake Atoll later, in December 1941, this removed a threat to their line of defense from Tokyo to the Marshall Islands. The Landmark includes World War II-related resources on Peale, Wilkes, and Wake Islands, the three islands in the coral atoll that comprise Wake.

On a warm, pacific day in 1941, U.S. Marines and Navy men alike waited in chow line for what could be their final meals. The frantic message had come through that morning uncoded, violating a dozen military orders: “Hickam Field Hawaii and Pearl Harbor have been attacked by Jap dive-bombers. This is the real thing. This is no drill.” Their orders were clear; to defend Wake Island from imminent Japanese invasion.

Many of those men never received that meal of hotcakes and syrup; a notion that remained with them throughout the ensuing 16 day battle and four long years of POW captivity. Shortly before noon on December 8th, a mere 5 hours after the assault on Pearl Harbor, the Japanese planes arrived at Wake Island. They dropped from thirteen thousand feet down to one thousand five hundred feet, revealing their rising sun insignia, and began an assault of bombing and strafing that lasted a short but devastating 10 minutes. 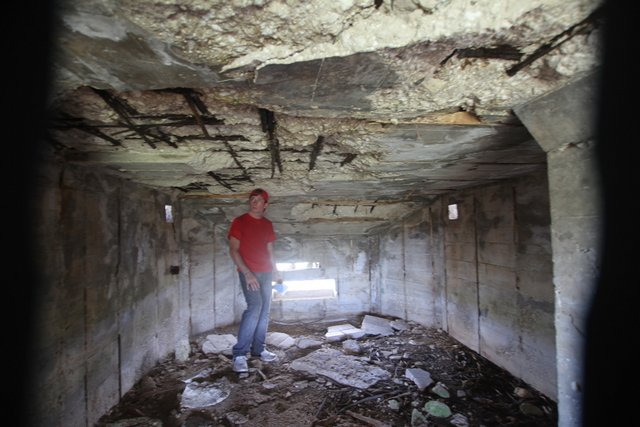 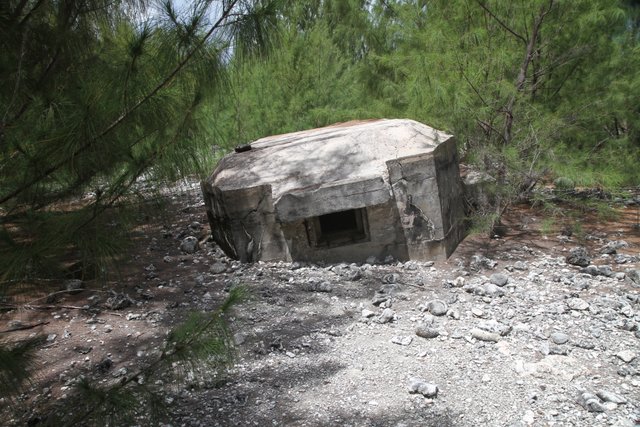 During a short, two week period in September and October 2010, Robert Lodge, accompanied by company conservation intern Rik Workman, would formulate a plan to survey and analyze all historic features on Wake Atoll. Their mission: To determine what means, if any, could be taken to preserve the quickly deteriorating historical monuments.

While a daunting task, they set out each day with specific goals in mind. The first objective was to document as many of the historic features on the island as possible for future study. It was understood that already many of the once present structures had fell victim to time and deprivation. The military had little long-term thought in mind while constructing the hundreds of pillboxes, bunkers, blockhouses, and gun revetments on island. This can be seen in the use of seawater while mixing their concrete. The salts in such water react har