One of the art conservation services offered at McKay Lodge Conservation Laboratory, Inc. is the preservation and restoration of historic documents and works of art on paper, and on occasion, a little bit of Rock n’ Roll.

A project recently completed at our art conservation lab just outside of Cleveland, Ohio was the treatment of a Beatles poster, an autographed print of “London Palladium” . When first approached, our Senior paper conservator, Gina McKay Lodge and conservation assistant, Dee Pipik, felt that “We Can Work it Out“, because for some conservation treatments “All You Need is Love”. 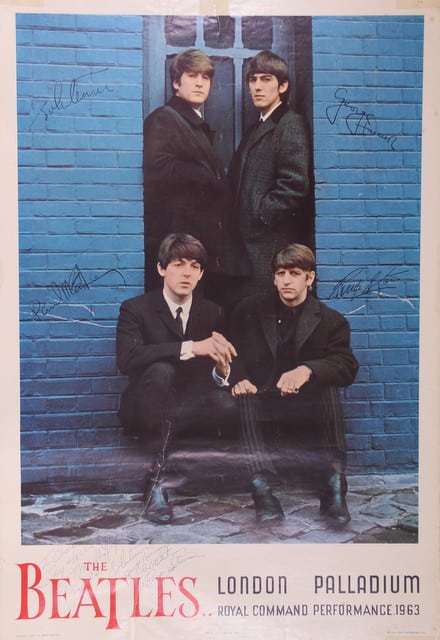 In early 1964 the Beatles were still making a name for themselves in America. This poster for their 1963 appearance in the Royal Command Performance at the London Palladium was sent to radio stations and record stores across the country as a promotional item in advance of the groups’ legendary appearance on the Ed Sullivan Show in February of 1964.

The four Beatles are pictured crowded into a doorway, but among Beatle experts, the poster is notorious for its inaccuracies, chief among them: the concert never took place!

The Beatles only concert at the London Palladium in October 1963 was not for a “Royal Command Performance,” but for “Val Parnell’s Sunday Night” television show (an appearance before a crowd so frenzied that many believe it was the true beginning of Beatlemania). The Beatles played for the Royal Variety Show in November, where John Lennon made his famous “rattle yer jewelry” introduction to “Twist and Shout.” The photo for the poster was actually taken in January 1964 and for some reason the image was reversed- most clearly visible in the direction of the sweep of the boys’ bangs.

Though the poster itself is not at all rare, this poster from 1964 is unique because it is signed by all four of the Beatles. Their printed signatures appear on the blue wall to either side of the doorway; two on each side. But at the bottom is an inscription and all four signatures in blue ball point pen.

“To Chuck, SAY HELLO! To The U$ of A. From U$, John Lennon, George Harrison, Paul McCartney, Ringo Starr”.

For the paper conservation treatment, the Beatles poster came to the lab having been tightly rolled for over 40 years. As it was carefully unrolled, more damage was revealed: numerous tack holes in all four corners, tears on the edges, some previously repaired with scotch tape, and a 14-inch tear from the bottom through the lettering and inscription and into the image.

Like most commercially produced posters, this one was printed on calendared paper. Calendared paper is made by compressing paper between highly polished steel rollers, giving it stiffness, smoothness, and gloss. Though these qualities make it perfect for printing colorful posters, it also makes it difficult to treat after being aged, torn, and tightly rolled. The stiffness makes it resistant to flattening, risky to wash, and the smooth glossy surface is difficult to repair invisibly. Clearly, this Beatles poster conservation treatment would be a challenge.

The first step was to thoroughly humidify the poster, relaxing it into plane. Then a few weeks in a stack of blotter paper under heavy weight so that the poster would retain the flat shape. Holes and tears were mended with Japanese tissue and wheat starch paste on the reverse. Some more flattening and a little inpainting to diminish the tears and the poster was ready for hinging and matting. The Beatles poster conservation treatment was a screaming success.

After working “Eight Days a Week“, the poster was framed and glazed with UV-filtering Plexiglass, the Fab Four are ready to grace a lucky fan’s wall!