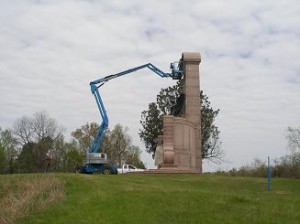 The National Park Service (NPS) of the Department of the Interior awarded the contract for performing maintenance of monuments at Vicksburg Mississippi at the Vicksburg National Military Park to McKay Lodge Art Conservation, Inc. Twelve of the larger stone and bronze monuments were selected by NPS for needed professional attention. Much regular light maintenance of the expansive park and its incredibly numerous monuments and markers is provided by corps of volunteers organized each year for Park Day.

Vicksburg National Military Park includes 1,330 monuments and markers, a 16 mile park tour road, a restored Union gunboat – the ironclad U.S.S. Cairo (pronounced “Care-o”), and a National Cemetery. The park commemorates the campaign, siege and defense of the strategically positioned Confederate fortress controlling the Mississippi River during the Civil War. On July 4, 1863 Vicksburg was surrendered by Confederate General John C. Pemberton to General Ulysses S. Grant whose Union forces had besieged the city and fortress since May 18, 1863.

The conservation work took place over several weeks in March; a month of comfortable temperatures where rainfall is statistically low. The team, led by Conservator of Sculpture, Monuments and Fountains Thomas Podnar, was given beautiful weather throughout nearly all their days. Work involved cleaning of stone and repairs to mortar joints and the cleaning, patination and heated applications of protective wax for the bronzes. In addition, the iron cook stove from the Cairo was studied for preservation in outdoor display on the ship and advice was given. The USS Cairo was sunk by a

In addition to the work on the selected twelve monuments at Vicksburg Mississippi, twenty-two additional monuments were appraised for future professional maintenance needs and condition reports on these were prepared.