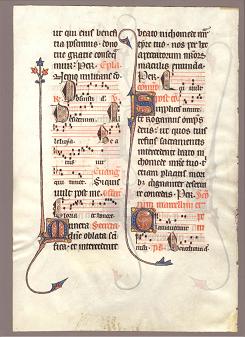 A unidentified manuscript leaf purchased at auction was at the lab for treatment by senior paper conservator Gina McKay. It was recognized by the lab’s president Robert Lodge as a rare manuscript leaf from a notable 13th century French missal “broken” by Cleveland collector Otto Ege (1888-1951). Otto Ege sold the leaf in boxed portfolios of leaves from other manuscripts representative of various periods, regions, and styles to museums and libraries for educational purposes. Needed work on the leaf was minor and included removal of some distortions, removal of tape adhesive and stabilization of applications of burnished gold fluid and their gum bases. The leaf purportedly was found among a large quantity of other manuscripts in Sienna, Italy. Examination of the leaf with a microscope revealed numerous very faint pencil marks at the bottom and the word “Sienna” could be identified. How the leaf ended up in Sienna is not known. All pencil marks were left untouched. Confirmation of the identification was obtained by Robert Lodge through side-by-side comparison of it with a leaf in one of the distributed portfolios at the Kelvin Smith Library of Case Western Reserve University. Positive comments from several scholars such as Barbara Shailor of Yale University who studied photographs of the leaf added to this confirmation. The best leaves from this manuscript believed to be from a church in Beauvais, France, those with large decorative initials and the few with historiated initials, represent the height of French Gothic illumination in the late 13th century. Even the leaves such as this one with smaller initials have lengthy, spiked foliate extensions representing the height of this Gothic design. Otto Ege produced 40 boxed sets of 50 leaves of which only about 19 are accounted for. Leaves from the Beauvais Missal are the most prized in the sets. Most of the boxed sets of leaves and also individual leaves from the Beauvais Missal are found at libraries and museums in the United States and Canada. One leaf that has been carefully studied and described is at the nearby Allen Art Museum in Oberlin. A detailed analysis of the leaf by medievalist Jeffrey Hamburger is on the museum’s website at http://www.oberlin.edu/amam/French_BeauvaisMissal.htm. Relatively recent interest in Otto Ege, “Breaker of Manuscipts,” has led to several projects which are attempting to digitally reconstruct the manuscripts used in the boxed sets on the internet. Dennison University’s project is titled “Circus Minimus: the Otto Ege Collection Database Online” and is attempting a virtual reconstruction of the manuscripts as far as possible. In 2005, the University of Saskatchewan produced an exhibition called Scattered Leaves and held a symposium Remaking the Book: Digitally Reconstructing the Otto Ege Manuscript Portfolio. Several holders of boxed sets have published their contents online, including the University of Colorado, Boulder and the University of Minnesota.