Here’s one work of Public Art Clevelanders may want to know more about.

What must be the most controversial outdoor sculpture work of Public Art in Cleveland, Ohio if not the largest, the heaviest, or the most costly, is the headless CLEVELAND VENUS by Jim Dine. Some hate it. Some love it. Some may be uncertain. Some probably never saw it. One thing is certain though, McKay Lodge Conservation Laboratory, a Cleveland area and national specialist in the conservation of Public Art, has been tasked with inspecting it regularly (using binoculars) and providing the maintenance necessary to keep it looking its best and lasting indefinitely. This is just one of several works of Public Art in Cleveland that McKay Lodge Conservation Laboratory is engaged with. But what is Public Art? We will get to that soon below.

CLEVELAND VENUS is an outdoor sculpture perched over the entrance to the Carl B. Stokes Federal Courthouse. ”Venus” overlooks, though headless, the Cuyahoga river at the intersection of Huron Road and Superior Avenue. Its brown, somewhat amorphous form contrasts with, and complements, the rectalinear white 22 story federal courthouse so masterfully engineered to fill a very precarious bit of remaining Cleveland real estate and so beautifully designed by the distinguished Boston based firm, Kallamann, McKinnell and Wood, Architects.

It is quite a formidable task to get up there and maintain the outside and the inside of this 37 foot tall, 23,000 pound bronze Public Art casting. That is a lot of surface area to maintain. And it is nearly impossible to get to. However, we can reach all areas of its surface and even climb inside only thanks to special alterations on the original building surface for attaching scaffolding to surface anchor points installed by Safway Services, LLC ‘s Cleveland branch. The plaza is not strong enough to support the size of aerial lift needed to reach all areas of the sculpture. The attached scaffolding must be erected every time maintenance is needed.

This bronze maintenance was last performed by McKay Lodge Conservation Laboratory in 2008. Maintenance intervals were initially projected to be necessary every five years, at costs ranging from $40,000 to over $60,000 per maintenance interval. But our 2008 custom blended surface protective wax coating endured far longer than predicted. Don’t ask, this wax will not be appropriate for your car.

Its 2017 now, nine years later, only now are there signs that surface protection needs renewing. So it will not be time for maintenance again until 2018, ten years later, based on inspections, and subject to funding. The original protective wax coating on the bronze when it arrived and was installed in 2002, a coating applied at the Walla Walla foundry in Walla Walla, Washington, began to fail within just 6 years, before 2008, which initiated our first surface maintenance campaign. Conservators are always making advances in finding more durable waxes and their mixtures.

The copper alloy bronze has to be protected from the formation of green copper corrosion products. Some bronze statuary people commonly see have been left, intentionally or through neglect, to form such a green corrosion layer.

But for CLEVELAND VENUS, the chemically induced brown color, the “patina,” is important and must be preserved. That color was selected by the artist. That color gives the massive statue contrast against the even more massive white building.

And more, if green copper corrosion were allowed to form, then rain would wash down some amount of the corrosion and put permanent green stains on the building face.

McKay Lodge Conservation Laboratory maintains, repairs, advises on, and sometimes has to refabricate outdoor sculpture and Public Art made from an incredible diversity of materials, from concrete, to steel, to light emitting diodes , and computer controlled effects, and doing this all over the contiguous United States, as well as in Hawaii (where we currently have two projects), Puerto Rico and the U.S Virgin Islands (where we currently have one project). So far, for us, Cleveland Public Art has not presented any challenges. And that’s good. But we are available for anything out of the ordinary.

The basic information on the Public Art CLEVELAND VENUS is available online, through a GSA internet page and an internet page by the United States District Court, Northern District of Ohio. And for an alternative opinion on the merits of the artwork, there is the comment in Cleveland Magazine, March 1, 2004.

There are some interesting facts about is fabrication worth restating here. Jim Dine modeled CLEVELAND VENUS as a clay sculpture just 26 inches tall. This was digitally scanned in three dimensions. The scanned data controlled milling machines that cut foam blocks which, when adhered together, would build up a full-scale replica of CLEVELAND VENUS in foam. Jim Dine directed foundry staff to cut “here and there” making adjustments to his liking. The bronze sculpture was produced in 250 cast sections that were then welded together to form CLEVELAND VENUS.

CLEVELAND VENUS is Public Art. What is Public Art? Well, Wikipedia nailed it as succinctly as possible: “Public art is art in any media that has been planned and executed with the intention of being staged in the physical public domain, usually outside and accessible to all.”

Lacking in Wikipedia’s definition is the importance of “planned” and an explication of it. In its truest sense, Public Art is purposely planned by a select group of people acting as representatives of the public of the locale where the artwork will be installed. And often the commission is paid for by public funds such as tax revenue or a combination of this with grants. 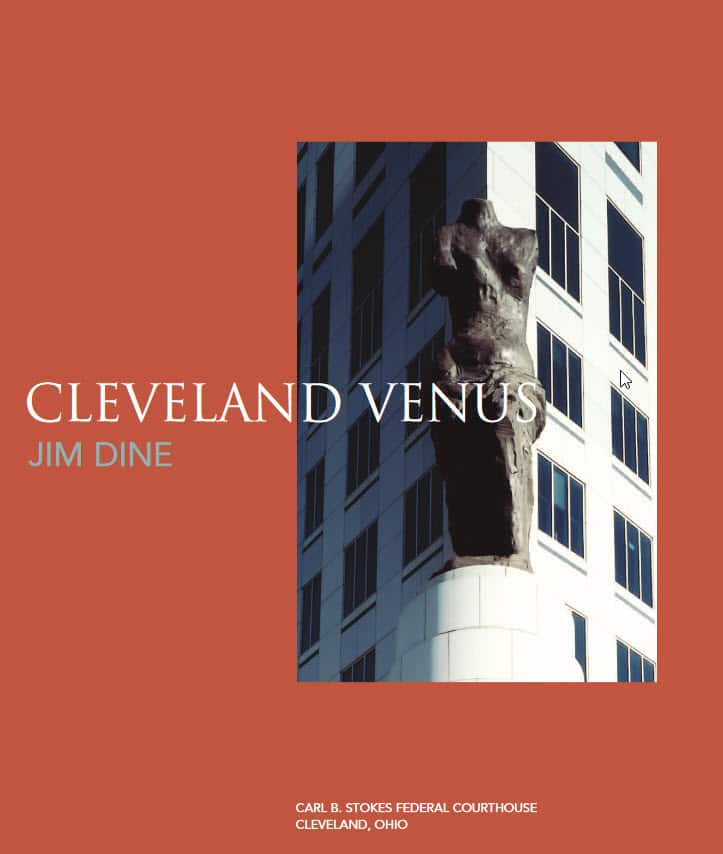 CLEVELAND VENUS is Public Art commissioned at the federal level, by the U.S. General Services Administration (GSA). GSA is a branch of the U.S. government that oversees all federal real estate and its buildings. GSA’s Art-in-Architecture program takes a very small percentage of a new building construction budget, such as for the new Carl B. Stokes Federal Courthouse, and commissions an artwork for it by a prominent U.S. artist. The planning commission for CLEVELAND VENUS was formed of individuals representing members of the public, art experts, the City of Cleveland, and government officials.

The panel assembled for the selection of the artist (Jim Dine) and the artwork (CLEVELAND VENUS) for the Carl B. Stokes Federal Courthouse consisted of:

The commission was made possible in part by:

This has been one post in a series devoted to the conservation of Public Art in Cleveland.