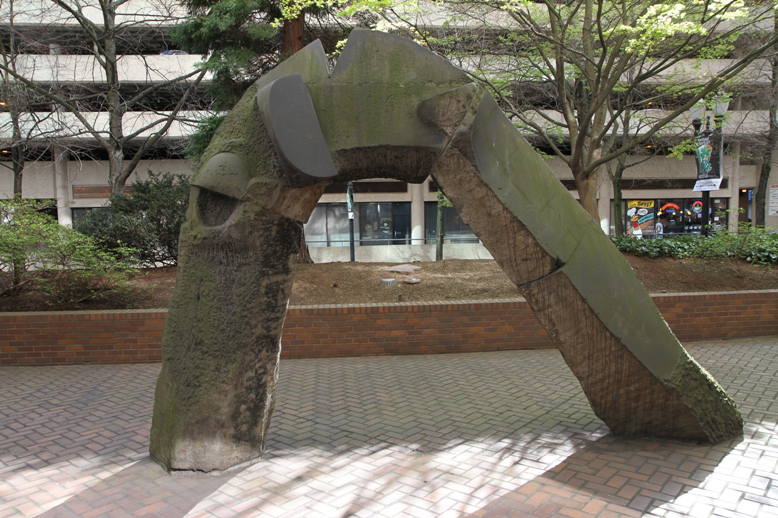 In September, 2010, a 12 foot tall, 9,000 pound sculpture in Portland, Oregon, a free-standing, monumental stone arch with joints of uncertain strength, had to be moved quickly and safely. The ability to turn the arched sculpture on its side was also a critical and challenging requirement. A design using expanding polyurethane foam and a steel space frame did the job safely. The project quickly became known as “Foamhenge.”

The stone arch was carved by sculptor Dimitri Hadzi and his assistants from Harvard University and elsewhere out of stone from one of the Eastern Oregon Basalt formations, working in a makeshift shop in Portland. The sculpture is titled River Legend. It is a 1976 GSA Art-in-Architecture commission for the Edith Green/Wendall Wyatt Federal Building at 1220 SW Third Avenue in Portland. River Legend refers to the Native American legends explaining the divine origin and divinely designed purpose of the “Bridge of the Gods,” a land bridge that formed from the Bonneville Slide (variously dated 1060 to 1700) across the Columbia River that divides Oregon and Washington states. A 1926 steel “Bridge of the Gods” now spans the river at that location.

Funded by the American Reinvestment and Recovery Act, the U.S. General Services Administration (GSA) is modernizing the building where this arched sculpture is sited, a 30 year old, deteriorating federal facility, into an economically and operationally efficient high performance green building. To prepare for the building renovation and to protect the artwork, GSA needed to have River Legend removed and stored prior to commencing renovation work because, in part, the sculpture was in a location ideal for the site’s hoist crane.

This was a stone arch built of five segments of stone, with a topmost keystone, and with carefully crafted, hairline joints. The artist remarked in documentation on the care he had taken to keep the joints tight and invisible. Documentation from the artist also indicated the heavy segments of stone had been bonded with epoxy and pinned with steel. But how strong were the joints? How could the arch be slung and lifted once the steel pins at its two “feet” were cut to free the arch for lifting?

Considering the requirement to move, store and then re-install the arched sculpture in a future new location at the building, it then was thought that, once it was removed, the need to have good and safe access to the undersides of the arch’s two “feet” would be desirable. The stubs of the original one inch diameter steel anchor rods would need to be cut flush, and drilling for new anchor rods would be needed. Also, removal of cement or mortar clinging to the bottoms of the two “feet” of the arch was likely to be necessary as it was known that the starting or “launch” stones were installed with steel rods in wet cement or mortar.

Ideally, if it could be somehow possible, the 9,000 pound arch with its aesthetically critical joints of uncertain strength would need to be turned on its side for the work on the undersides of its “feet.” That thought took considerations beyond a relatively simple engineering feat of lifting an arch. Now, it was desirable to turn it on its side safely, without stressing or rupturing the joints of its heavy stone segments and keystone.

An engineering study could not offer any promise of sufficient strength for the arch to simply be under-wrapped with slings and lifted. Zero risk of stressing the joints between the stone segments became the government’s wish. A fast but absolutely safe solution was needed.

Knowing of the use of injected foam for support in packaging and awareness of the widespread achievements of space frame support structures in airports, shopping malls, and monumental architectural glass facades encouraged a consideration of how the two could work together strategically – foam and frame. 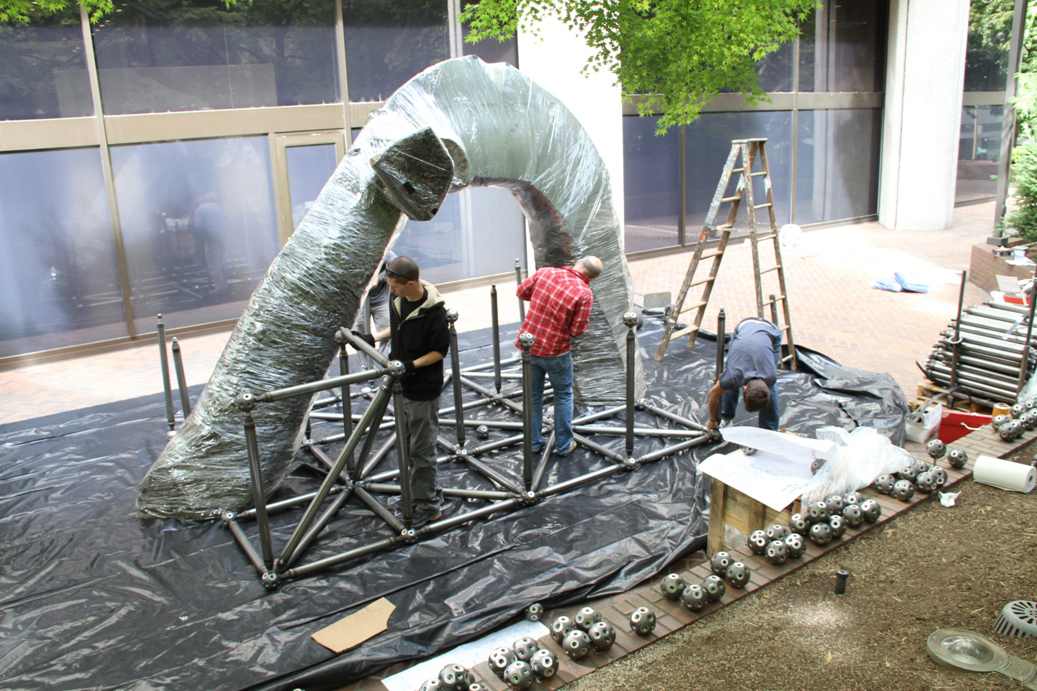 The ability of expanding foams to conform to surfaces and the phenomenon of weight distributions led McKay Lodge Art Conservation, Inc. to test an idea it had that foam could, by weight distribution and its adhesive anchoring to the structural support of a rigid space frame, allow this 9,000 pound arch to be foam-contained and fully manipulated in any direction, locked within the rigid structure of an engineered steel frame.

Mock-ups were made and tested at its sculpture conservation facility. Materials suppliers and space frame engineers were consulted. Finally, it became clear that this was the solution and sufficiently clear to propose with confidence and exact costs a solution for safely removing River Legend; lifting it, transporting it, moving it into storage, retrieving it and transporting it again; eventually turning the arch on its side, then righting it, and then re-planting it into new concrete footers with new steel anchor rods. And when all that was done, removing the arch from its locked and secure position in the space frame.

So it was proposed as was it conceived, tested and the project received a GSA order. A Delta Structures System III Space Frame was selected and commissioned for the project. Delta engineers designed a tight fit using a three-dimensional scanned data model of the arch. The space frame had to provide sufficient rigid support while having overall dimensions that would not require wide-load trucking or routing to avoid low overpasses.

Conservator Robert Krueger and his assistant also participated in the preparations of the sculpture for its removal, through space frame construction and foaming. 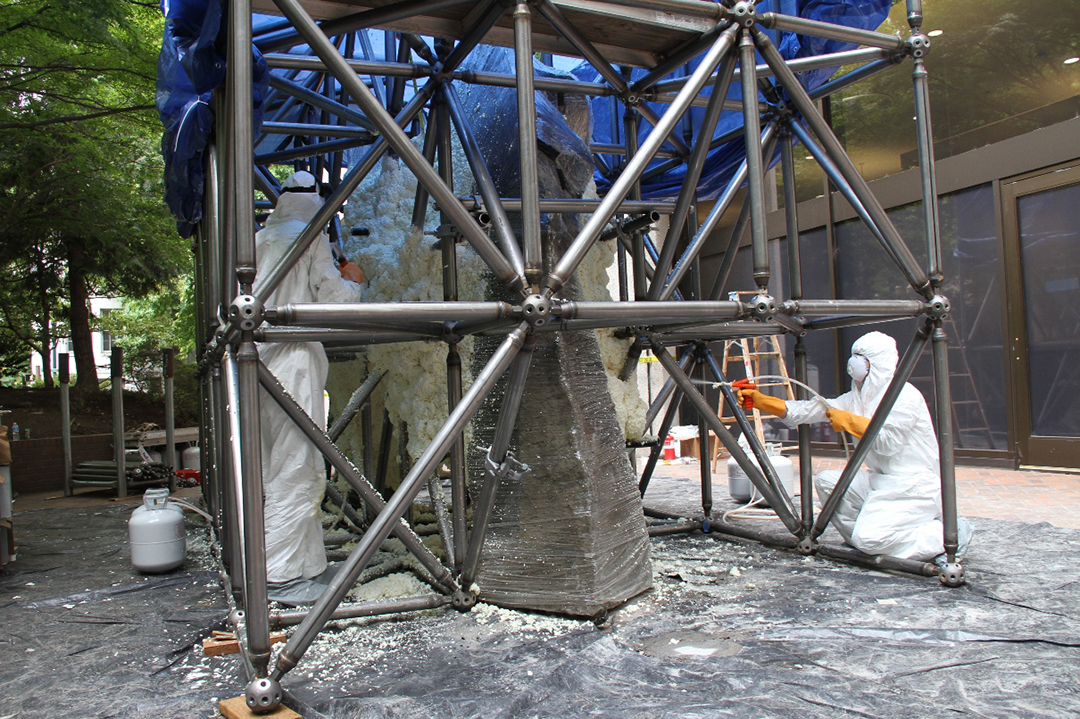 So it was executed as it was proposed and was ordered. Employees of McKay Lodge Art Conservation and Cascadia Art Conservation Center, LLC teamed up to provide the labor and direct the move. The steel Delta space frame was constructed around the arch and the sculpture was foamed within it. Additional steel supports were fastened to the space frame running under the arch so that steel supports would be close to the stone at this critical area. After cleaning the stone, clear plastic was wrapped tightly around the arch to protect all stone surfaces from contact with the foam. Expanding polyurethane foam with a density of 2 pounds per cubic foot was then sprayed all over the sculpture and allowed to build and engage the steel of the space frame. 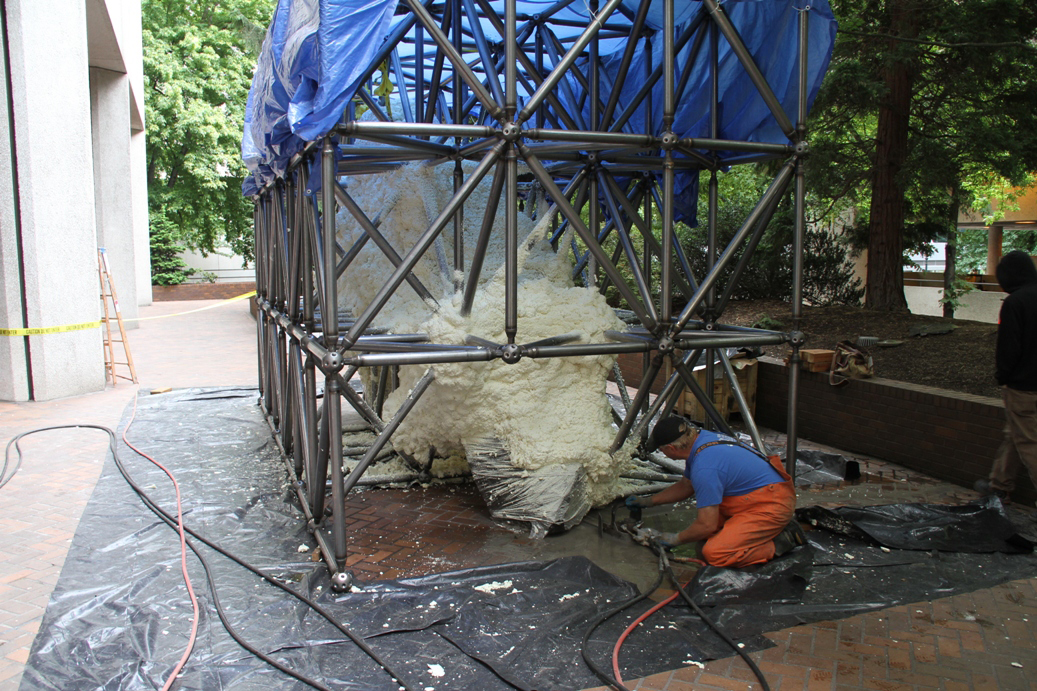 Finally, the arch was cut free of its footers with a diamond chain saw. The space frame with the arch securely locked inside was hoisted to a trailer and taken to storage where it will remain for approximately two years. The total weigh of sculpture and framework was 20,000 pounds. 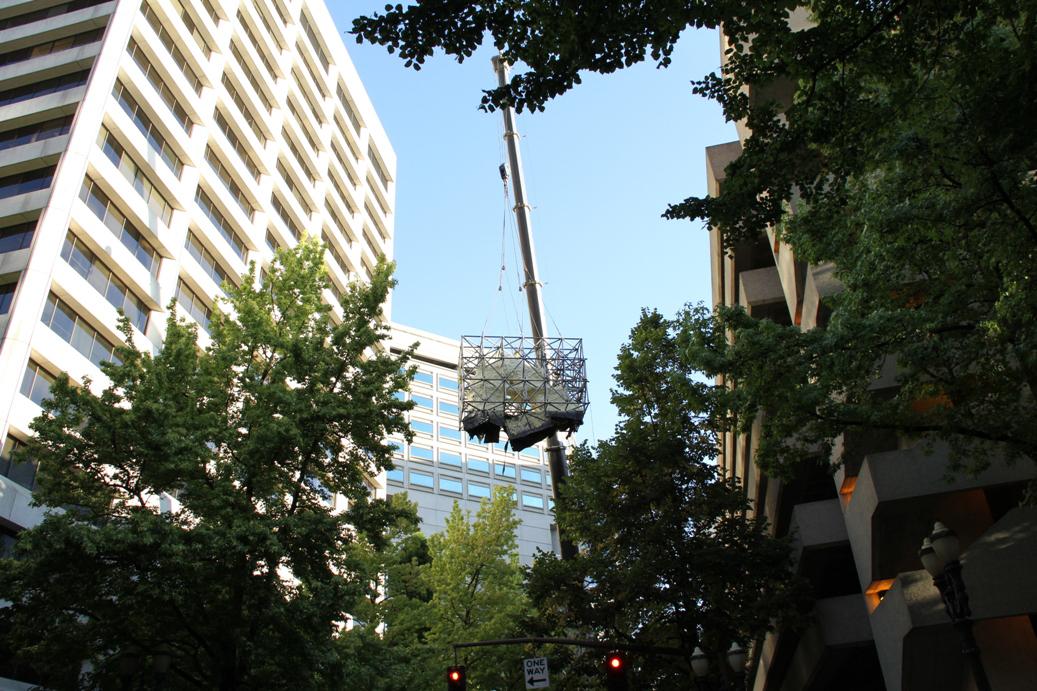 The arched sculpture in its frame can be safely rotated with a double drum crane. On re-installation it will be necessary to do this in order to remove residual concrete, mortar and steel pins on the undersides of the arch’s “feet” and install new steel anchor rods. Then the arch can be righted and lowered into fresh concrete. When the concrete has cured, the frame and foam can be removed. 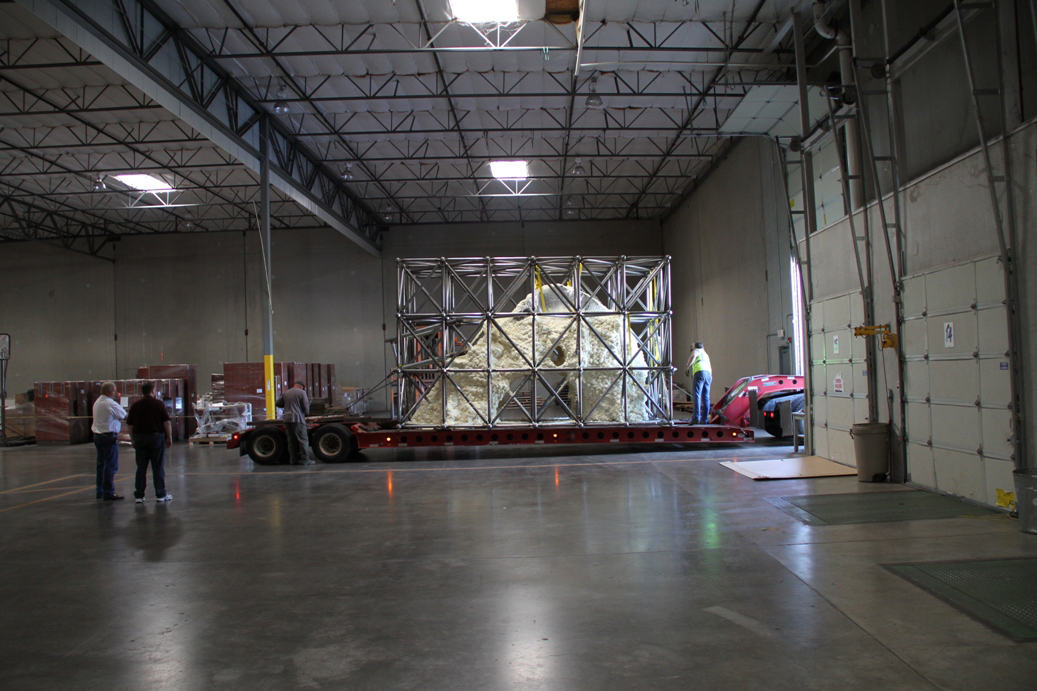