McKay Lodge Art Conservation Laboratory is pleased to be able to donate to the Cleveland Police Historical Society and Museum the full paintings conservation treatment and round-trip transport of their cherished 8 foot x 6 foot painting “Passing Policeman.” The art conservation treatment will be performed by paintings conservator Stefan Dedecek. The painting is at the art conservation laboratory now and should undergo treatment this winter in the Ohio center’s schedule of work. The painting’s large scale, its complications of difficult problems and deteriorating materials, plus our provision of round-trip transport in our climate-controlled truck, bring the value of this donation to over $12,000. 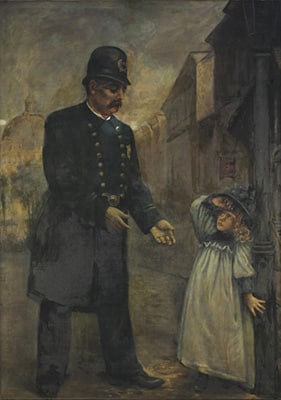 This paintings conservation corporate gift, in part a support for the arts and support for museums in Cleveland, is given at a time when the Cleveland museum is moving to new quarters and we are pleased to play a role in support of that effort by relieving the museum and association of an expense likely to have been far too much to bear.

When we were contacted by the association’s president, Tom Armelli (retired detective, CPD), seeking art conservation services, and we learned more about this great museum and its move, we just had to help the museum a bit and the Cleveland Police and its public too. We look forward to our visit to the museum’s new home.

The painting “Passing Policeman” has an interesting but sad past. Mr. Armelli shares that information below through a past report from the museum’s curator:

One cold gray afternoon in January, I received a call from a warm friendly voice that wondered if the museum would like a collection of police clippings from the 1920s and the 1940s. The next day James and Rita Vail donated eight scrapbooks brimming with articles about heroic deeds of police officers and grizzly tales of crime waves during the prohibition era. Both Vails had worked the Cleveland Press Police Beat as young reporters in the late 1940s and early 1950s out of Central Station on Payne Avenue. It was then that they had rescued the abandoned scrapbooks destined for obscurity in the garbage dump.

Our senior volunteers who never resist an opportunity for a nostalgic meandering donned their white gloves and dug into the newly acquired treasure trove. One of their first discoveries was an article clarifying some of the history of our wonderful painting of the police officer and child which resides over the 1960 Harley-Davidson three-wheel motorcycle at the entrance to the museum. 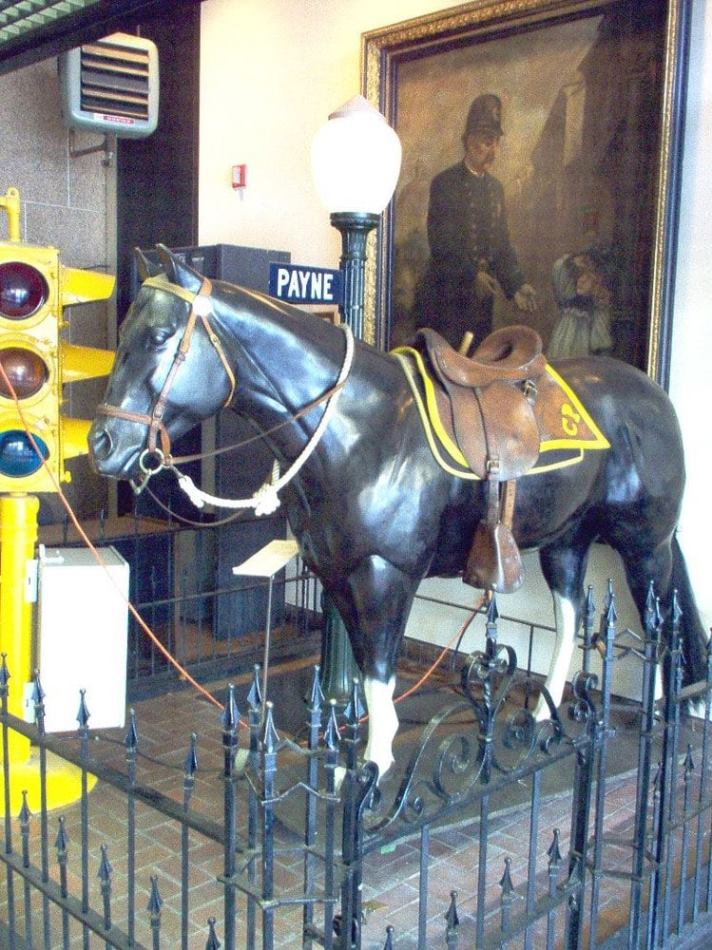 Up until this point the museum had little knowledge of how and when this painting was acquired by the Cleveland Police Department. The Museum’s first Director Florence Schwein endearingly referred to the painting as Officer #52 based on the wreath of the helmet, a standard part of the late 19th century police attire. Mrs. Schwein writes in the October 1983 CPHS newsletter “The officer’s attitude of caring is shown by the gesture of his out-stretched hand toward the child.” She goes on to describe the museum’s caring of its collection is done through conservation in an attempt to prolong the life of artifacts. She introduces Peter Paul Dubaniewicz, professor emeritus of the Cleveland Institute of Art who along with his daughter, Paula Dubaniewicz, restored Officer #52.

But questions remained about the origin, or provenance as we say in the museum biz, of the painting. So this rediscovered article from January 3, 1927 tells us that when the Cleveland Police Central headquarters moved from its location of 33 years on Champlain Street to Payne Avenue in 1926, the fate of the painting was revealed in the headlines “Goes to Join Small Beers in Limbo, GLORY OF ‘PASSING POLICEMAN’ FADES – Painting, Once Admiration of Thousands, Banished to Boiler Room.”

Passing Policeman, as the painting is referred to, was apparently inspired from a title of a well-known “old and sad song.” The song told the story of a policeman, left alone when his wife disappeared with their only child, a baby girl. Years later while walking his beat he came upon a lost child who turned out to be his own daughter.

You were a babe in arms, dear, when your mother left me one day.

Left me at home, deserted, alone, and took you, my child, away.

The article asserted that the painting had been “Admired and wondered about for more than thirty years while it hung from a wall in the old police station on Champlain Avenue SW.” Now the painting was banished to the boiler room at the new Payne Avenue Station. Chief Jacob Graul said the reason was “because it is out of harmony with the bright shiny surroundings of the new building.”

The news article referenced in the report above

was printed in the Cleveland Plain Dealer on March 1, 1927.

Here are the lyrics to this touching song:

Words by EDW. B. Marks

She walked beside him, dried her tears and smiled,

Said he to her kindly, “Now you must not cry,

I will find your mama for you bye and bye.”

At the station when he asked her for her name,

And she answered, “Jennie,” it made him exclaim:

“at last of your mother I have found a trace,

For your little features bring back her sweet face!

“Do not fear, my little darling, and I will take you right home,

Come and sit down close beside me, no more from me you shall roam,

For you were a babe in my arms when your mother left me one day;

Left me at home, deserted, alone,

And took you, my child, away.

“Twas all through a quarrel, madly jealous she

Vowed then to leave me, woman-like, you see.

Oh, how I loved her, grief near drove me wild!”

“Papa, you are crying,” lisped the little child.

Suddenly the door to the station opened wide,

“Have you seen my darling?” an anxious mother cried.

Husband and wife then, meeting face to face;

All is soon forgotten in one fond embrace.

McKay Lodge Art Conservation company’s president, Robert Lodge, says he is “thrilled to help make this picture clean, attractive, preserved, and visible to the Cleveland public and its city visitors again.” Robert Lodge is also thrilled that Cleveland police at one time rode Indian motorcycles – cities had a choice among two competing brands.

Thrilled about this because our company president, Robert Lodge, collects, rides and restores old Indian motorcycles as a very active hobby and likes those police departments best who at one time or another choose “Indian.”

Butler Institute of American Art
Restoration of the 1939 Worlds Fair Topographic Map
Painting Conservation of an Ugo Rondinone: You are getting sleepy......
NPS Training and Objects Conservation in the Florida Keys