In murals conservation (or mural conservation) removals for relocations are sometimes necessary for their survival when the buildings that house them are slated for demolition or for invasive alterations. These removals, as here, can be both extremely difficult and toxic when the adhesive used was a mixture of “white lead” or lead carbonate in linseed oil.

McKay Lodge Conservation Laboratory, Inc. has been hired by Ely, Inc. of Washington DC to be the consulting and participating conservators for the removal of N.C. Wyeth’s monumental mural APOTHEOSIS OF THE FAMILY. The 18 foot tall and 64 foot wide mural was painted in 1932  and attached  to the lobby wall of the Wilmington Savings Fund Society. The bank building has been sold to Wilmington real estate developer Buccini/Pollin Group, Inc. who will convert the  old bank building into a hotel. 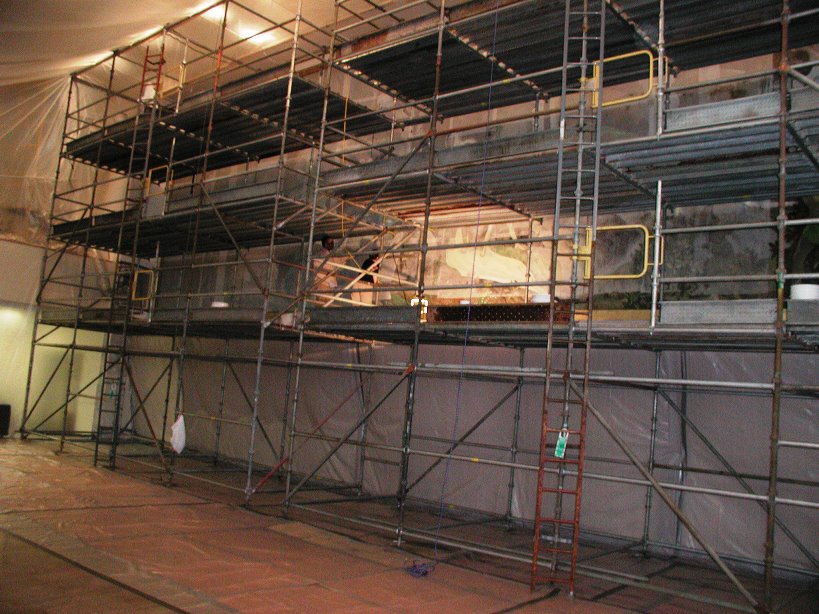 View of the Viewer’s Left Portion of the 64 Foot Wide Mural now Covered in Scaffolding.

Because of the tremendous scale of the mural, the largest mural in the U.S. in its time, it could not be retained in the conversion design. However, after removal, it is planned that the mural will remain in Wilmington and be prepared for installation in the Historical Society of Delaware several blocks away.

Following a 2007 feasibility study for its removal by McKay Lodge Inc. president Robert Lodge, Buccini/Pollin  Group, Inc. agreed to fund the mural’s removal and hired the Washington, DC museum services firm Ely, Inc. to execute the task. Meeting the requirement that the work be performed in conjunction with an art conservator, Ely, Inc. in turn hired back McKay Lodge, Inc. as the required conservator participant. McKay Lodge , Inc. paintings conservator Stefan Dedecek  has been principally involved in the conservation work of this project. 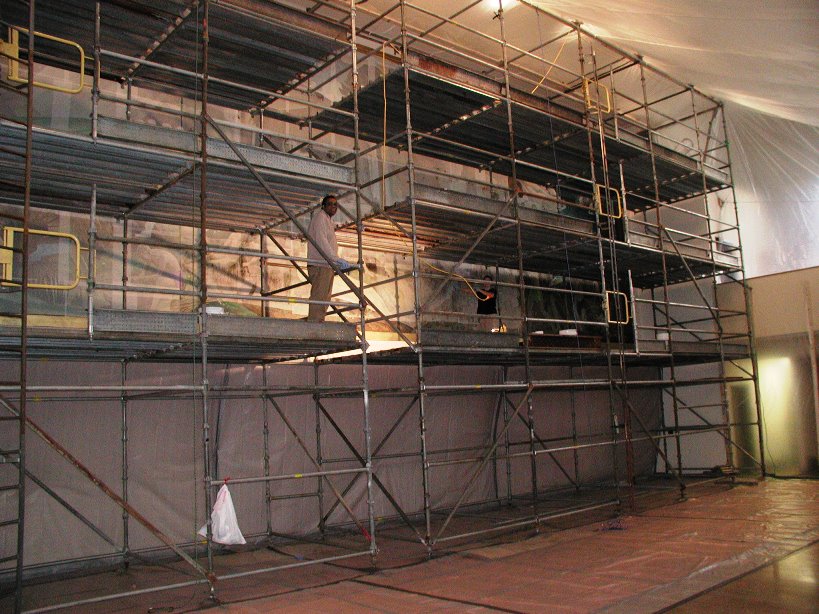 View of the Viewer’s Right Portion of the 64 Foot Wide Mural now Covered in Scaffolding.

Removal of the mural from the plaster wall is particularly difficult not because of its size but because it remains well bound to the plaster by a layer of “white lead” adhesive. This was a common adhesive in the 20th century, particularly the 1930’s, for attaching murals to walls and was made by mixing white carbonate of lead (a common white pigment) with linseed oil. The adhesive had sufficient tack to keep a canvas in place until the mixture cured, had a long curing time allowing sufficient time for correct placement of canvas, but eventually hardened by oxidation of the oil through reaction with the lead carbonate.

The difficulties arise both from the extreme hardness and adhesion of this adhesive layer and from its toxicity due to lead. The removal work of the mural project is being performed in the lobby sealed under strict lead abatement compliance measures. In addition, the lobby is being humidified and warmed to increase the flexibility of the aged stiff paint and adhesive layers. All this makes for extremely uncomfortable working conditions. 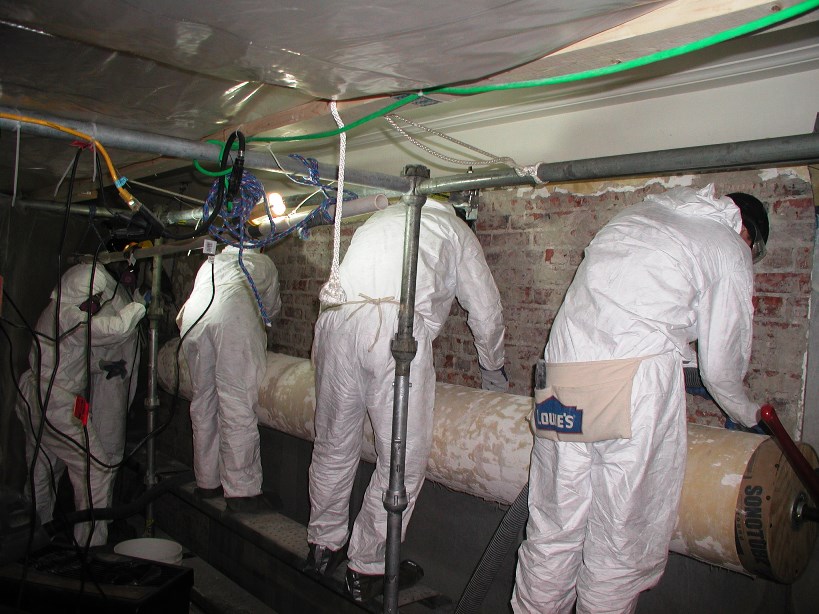 Detachment of Each Section Begins at the Top by Demolition of the Plaster Layer on the Brick Wall, Collecting the Mural onto Tubes.

The mural is composed of five individual pieces of canvas. Each is being detached from the wall starting at the top and the canvas of each is collected onto horizontal tubes that can be mechanically lowered. A mechanical means of holding and lowering the tubes is necessary because of the great weight of the mural which is retaining the heavy lead adhesive layer on its reverse. Much of the detachment can only be achieved by destruction of the wall plaster behind the canvas with electric chisels.

It is expected that all five sections of canvas will be removed by the end of February 2008. At that point, a considerable amount of work remains involving cleaning of the reverse  of each canvas free of plaster. The lead adhesive can not be removed from the canvas reverse. A facing of paper applied to the front also has to be removed. Then each canvas must be mounted for display so that each joins tightly to another for a continuous effect.