In May of 2017, The National Park Service awarded a contract to McKay Lodge Conservation Laboratory for the stabilization of two severely corroded but significant artifacts and for the training of local National Park Service personnel in continued corrosion control maintenance of them. Though McKay Lodge Conservation Laboratory was the high bidder, the company and its proposal for treatment and training was considered the most qualified. McKay Lodge staff performed the objects conservation work was performed within weeks of the award. 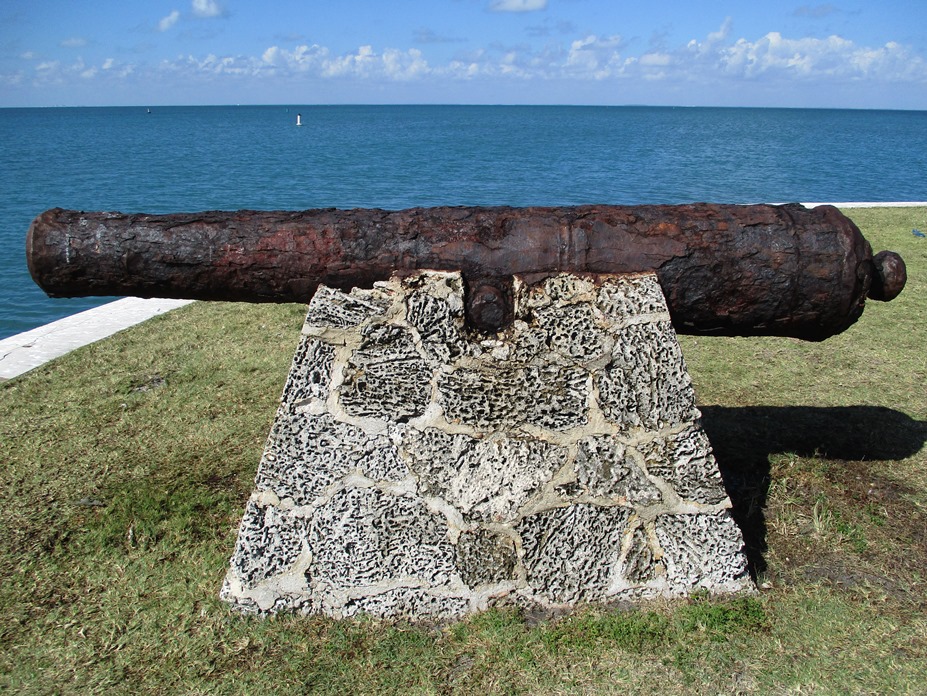 The 17th century British cast iron cannon on Boca Chita before treatment. It was recovered in the 1930’s from the wreck of the HMS Winchester (1695).

These two historic cultural features located on two separate islands within the park, one on Totten Key and the other on Boca Chita, were being slowly lost to structural deterioration from severe corrosion but are significantly valuable contributing elements to these National Register of Historic Places properties.

One of the items is a British cast iron cannon recovered in the 1930’s from the wreck of the HMS Winchester (1695). After it was raised, it apparently received no attention for preservation but was simply mounted on a pedestal on Boca Chita, once a private property, facing the waters. 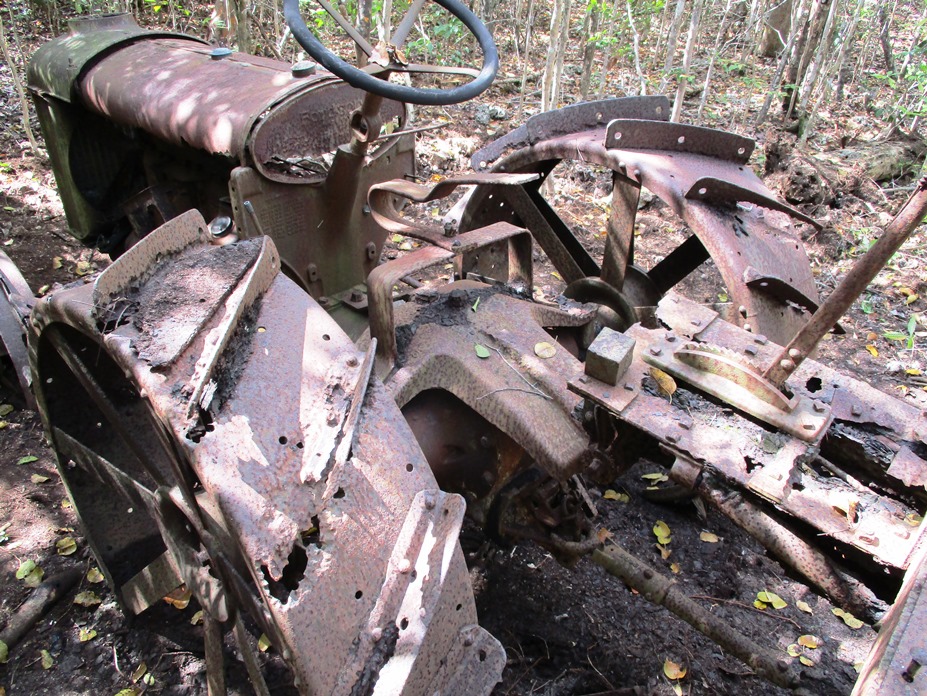 The other significant artifact was a Fordson Model F kerosene-burning tractor (manufactured 1917-1928), located a good walk from the shore on Totten Key.

Totten Key is now The Jones Family Historic District, on the National Register of Historic Places. This key is an example of the exploration and settlement of the Florida Keys at the turn of the twentieth century. Totten Key was a wilderness that with great labor by the Jones family was turned over to agriculture.

Today, Totten Key, has returned to the wilderness it once was. The old Fordson tractor, original to the Jones family farm,  remains the sole artifact of evidence of any human activity on the key. The key has no docks, no roads, just a creek and accidental footpaths among the heavy growth from visitors who come by boat and wade in to shore. 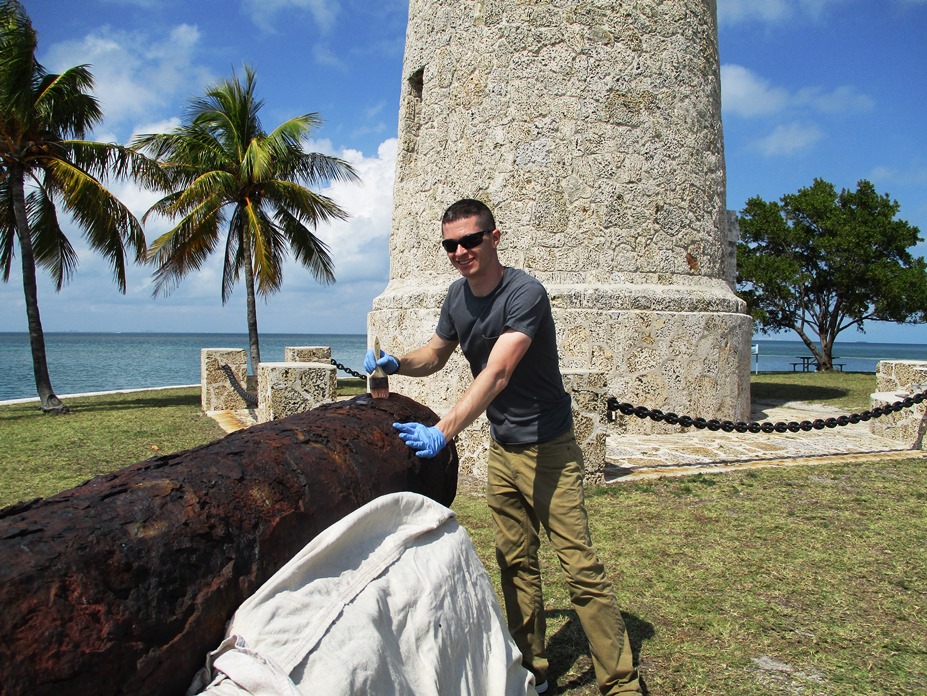 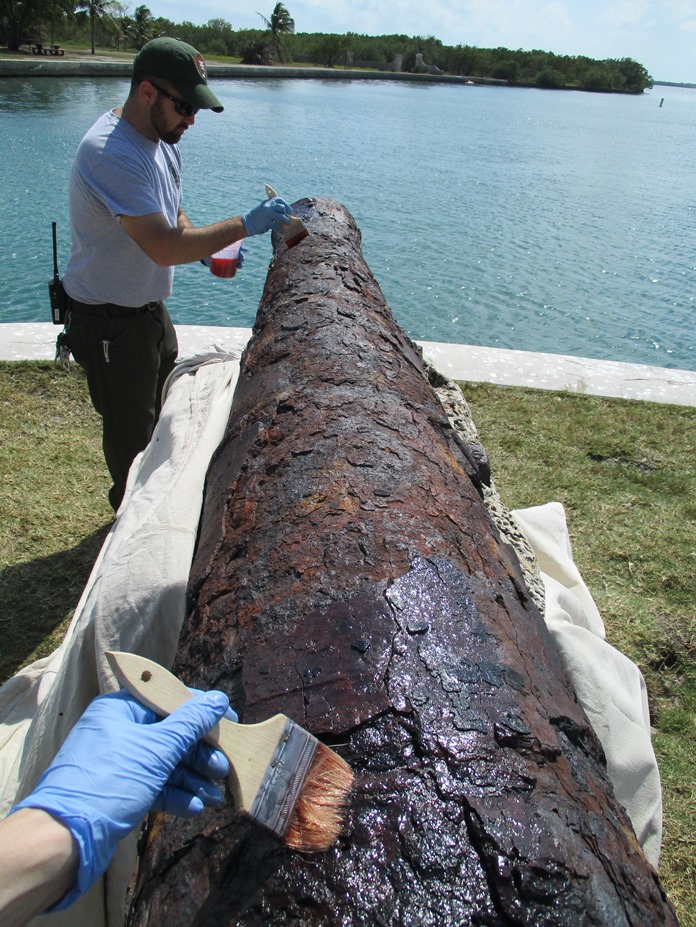 National Park Service employee begins the initial application of Ship-2-Shore PLID. Prior to this, the corrosion crust was cleaned of all loose corrosion, chemically treated to remove bound and soluble salts, rinsed copiously with fresh water, and allowed to dry. 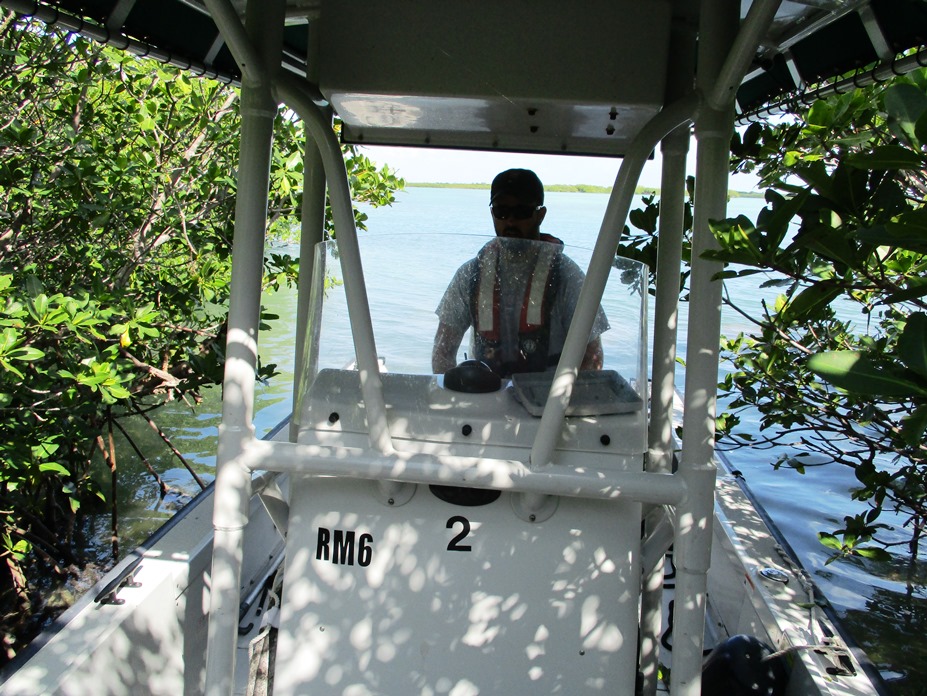 This is the way into Totten Key. One can only take a small watercraft such as this owned by the NPS so far, then one must wade in to shore. This watercraft carried the personnel and treatment materials and tools every day, with each trip from the mainland taking one hour. 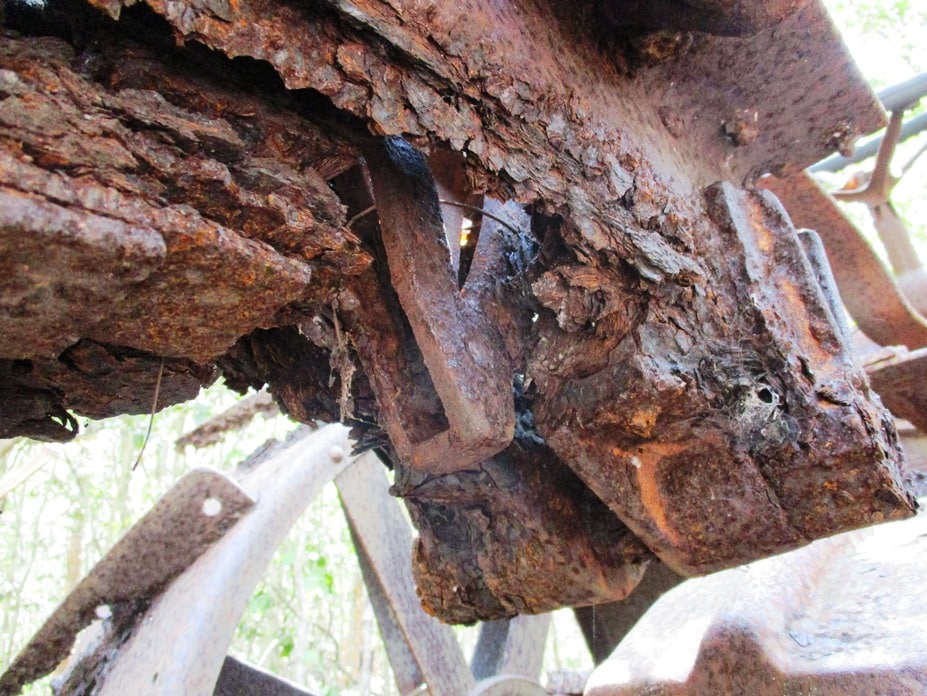 Example of the corrosion crust on the Fordson tractor. What remains can have further corrosion completely halted through the prescribed treatment if maintained with follow-up treatments about every five years by NPS staff. 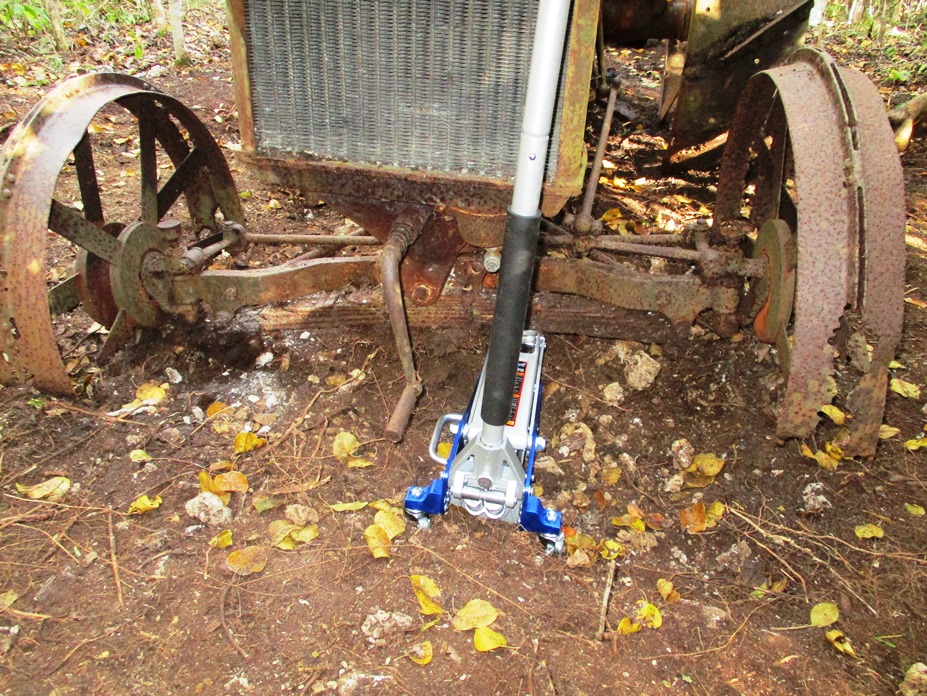 The tractor and the trailer wheels were extracted from the soil with a jack. 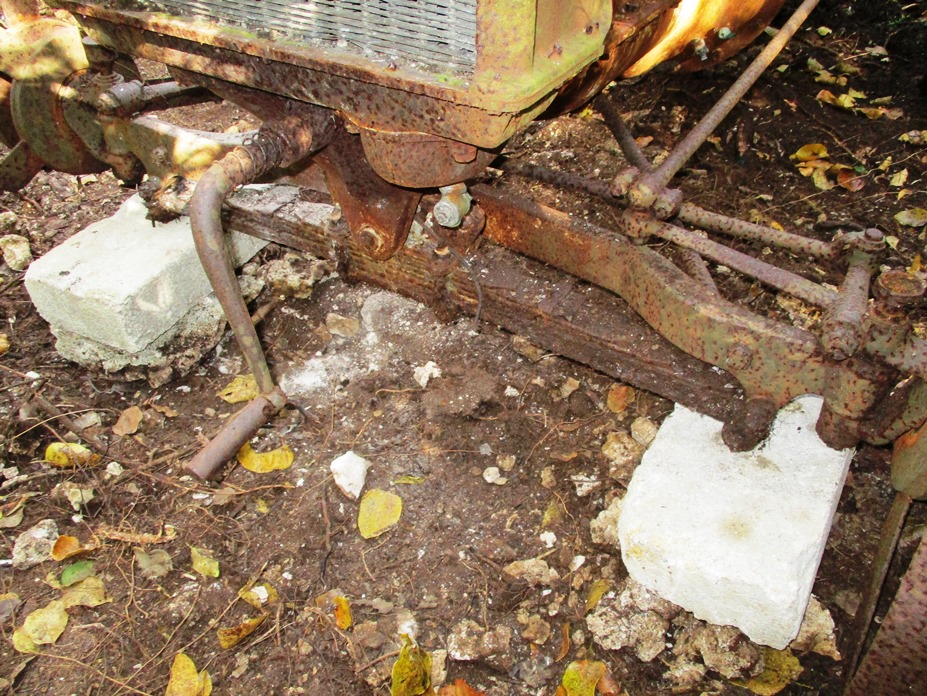 The tractor and trailer wheels were set above the soil on concrete blocks. These will sink in time and will need inspections and maintenance. 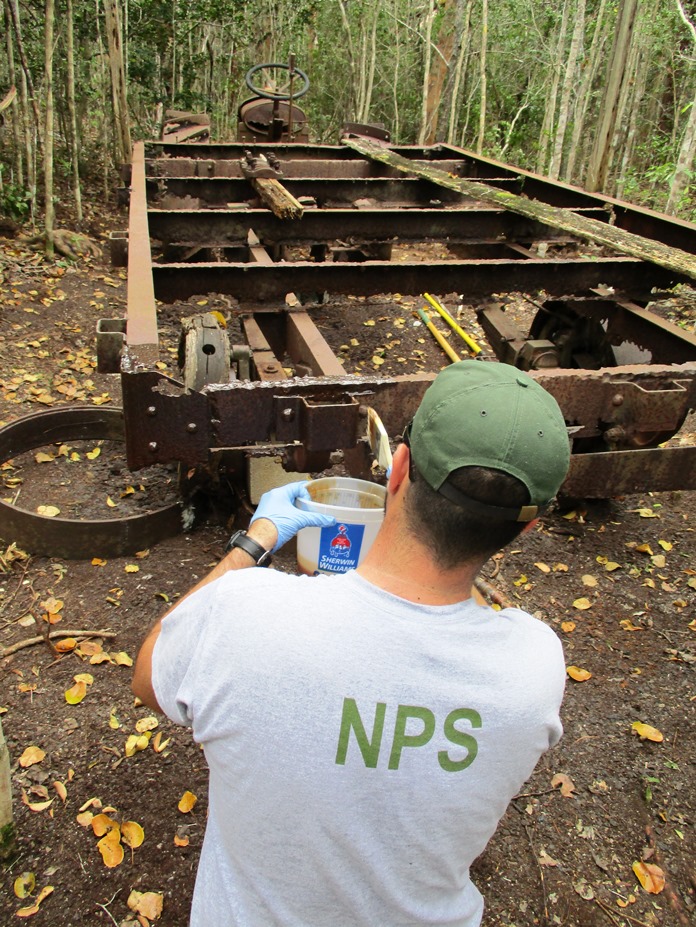 An NPS staff member begins the initial application of Ship-2-Shore PLID. Prior to this, the corrosion crust was cleaned of all loose corrosion, dirt, hardened grease and other materials that would limit penetration into the crust to reach remaining steel. 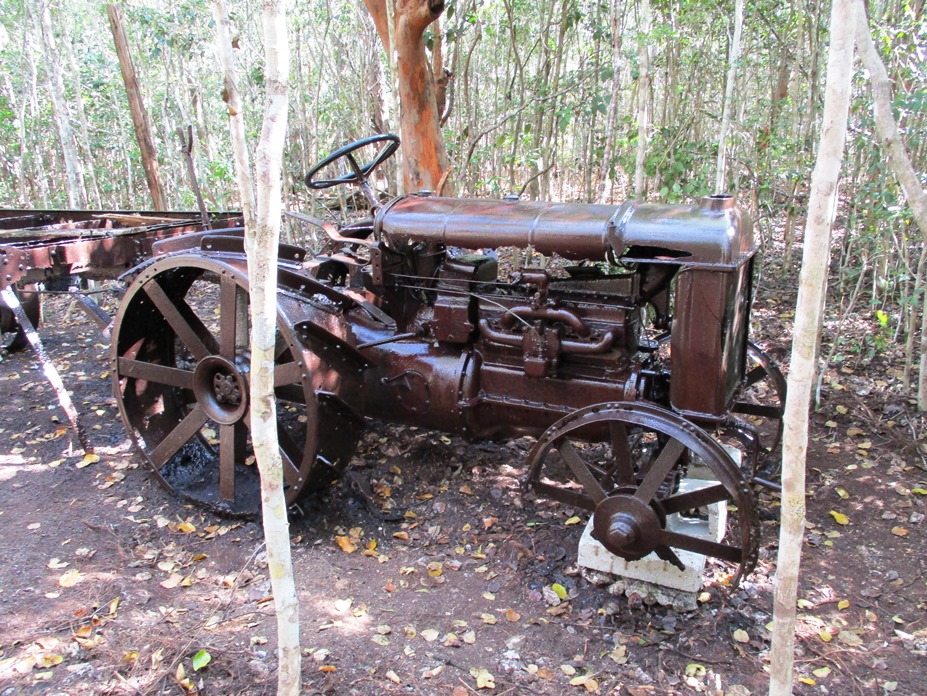 The Fordson tractor after cleaning, penetration of all surfaces with Ship-2-Shore PLID, followed by Ship-2-Shore Industrial. We have 13 years of experience and real-time evaluations of Ship-2-Shore in many environments and know the S-2-S products’ properties very well, as well as the estimated reapplication maintenance intervals.