Through research, experimentation, and consultations with metallurgists and corrosion control engineers, McKay Lodge Art Conservation Laboratory, Inc. has been able to successfully deal with a variety of preservation issues with low alloy, structural weathering steel commonly known as Cor-Ten, the registered trademark of United States Steel Corporation (USS). This steel has been widely used in outdoor artworks and is a known problem in sculpture conservation. The original Cor-Ten steel was designated A242 and the current equivalent is designated A588. A number of artworks made of this weathering steel were recently treated and preservation plans were recently developed for others by McKay Lodge, Inc.

McKay Lodge Art Conservation, Inc. has put five years of testing toward finding the most effective and long-term corrosion control coating for damp unseen areas of these sculptures. These areas are prone to continuous corrosion and development of pack-out, and the conservation lab has begun using a Canadian product in wide use in the Pacific maritime industry but little known in the United States. Several conservators of outdoor artifacts have only now begun to call for this effective product.

In 2005 McKay Lodge Art Conservation, Inc. removed, treated and relocated the David Davis monument in memory of David Mark Berger, one of the 11 Israeli athletes killed in the 1972 Munich Summer Olympics. Treatment of the Cor-Ten steel art involved corrosion control and the weld-filling of metal lost by corrosion.

McKay Lodge Art Conservation, Inc. provides among its diverse sculpture conservation services expert weld-filling of metal losses in Cor-Ten steel art – a very difficult skill requiring special techniques and special materials for a successful appearance and assurance of the same corrosion characteristics as the original. In outdoor spaces, ground contact corrosion is a common problem with Cor-Ten sculpture and the company has provided successful measures designed to eliminate rapid corrosion in these areas. Currently, McKay Lodge, Inc. is involved with designing preservation measures for the many Cor-Ten structures that comprise the site-specific installation Baltimore Project by Richard Fleischner located on the campus of the highly secured Computing Center of the Social Security Administration in Woodlawn, Maryland. 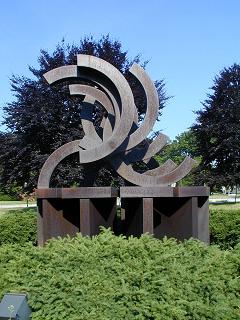 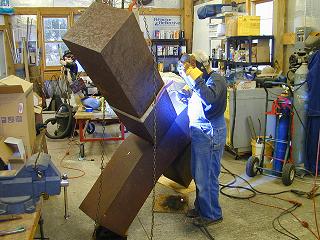 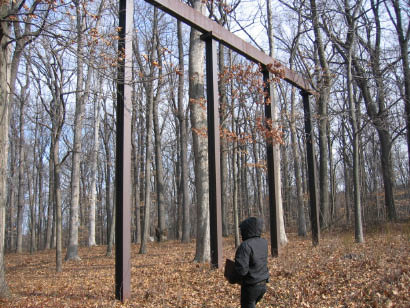 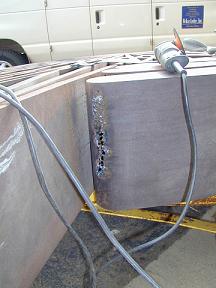 On-site weld-filling of corrosion losses in a sculpture by Lucas Samaras in New Orleans.