Conservation Technician Dee Pipik attended the 2015 Society of Gilders (SOG) conference in downtown Chicago June 1-6, 2015, joining fellow gilders and gold leaf artists from around the world for gilding classes, lectures, social events, and a community service project. The week wound up with the dedication of the Museum of the Gilding Arts in Pontiac, Illinois.

The first lecture was held by noted sculptor, painter and gilder Bruno Toupry, who is a Mobilier National contractor, Grande Médaille d’Argent of the city of Paris and Ami du Louvre. Bruno traveled from Paris with his family to talk about la reparure (gesso recutting).

Mother/daughter team Sarah and Alex King demonstrated the art of angel gilding used by sign painters from 1880 – 1930. Angel gilding uses metal salts in solution to deposit gold, silver or copper onto glass. In addition to producing commercial signs, this technique is used to make mirrors and stained glass.

A round table discussion followed of “How to Price Your Work” with Michael Kramer (President of The Gilders Studio, Inc.), Jill London (artist and gilder), Michael Gilbert (gilder and teacher) and Micki Cavanah (owner of Reed’s Gold Leaf). This gave attendees a chance to learn from experienced gilders and ask questions pertaining to this essential aspect of the gilding trade.

The Glessner House, owned by industrialist John Glessner and his wife Frances, was designed by prominent 19th century Boston architect Henry Hobson Richardson and completed in 1887. Richardson’s Romanesque design deviated from the European styles popular for residences at the time. A large central courtyard provides ample natural light and the warm wood interiors are the perfect backdrop for the Glessner’s collection of decorative objects and furnishings.

The coffered ceiling of the dining room was originally gilded but through the years the gold was covered with layers of imitations. Volunteers from the Society of Gilders, led by Michael Kramer of The Gilder’s Studio, Inc., re-gilded the ceiling with 23 karat gold provided by Giusto Manetti Battiloro. The project offered great opportunity to learn or practice surface gilding with the experts in a beautiful environment.

Museum of the Gilding Arts

On Saturday, June 6, Gilding Conference 2015 attendees boarded a bus for nearby Pontiac, Illinois on historic Route 66 for the grand opening of the Museum of the Gilding Arts (MOGA). The museum was completed just in time for the conference, and attendees witnessed the (gold) ribbon cutting and dedication on Saturday. Also in attendance were Pontiac Mayor Bob Russell, The Pontiac Chamber of Commerce, M. Robert Swift and his wife Joan, Society of Gilders President Naomi Lipsky, and Councilman Rich Burbridge.

The highlight of MOGA is a recreation of the Swift Gold Beating Factory of Hartford, Conn, the last hand gold-beating factory in America before machines replaced the heavy mallets once used to beat molten gold and silver into thin leaf. The factory closed in 2005 after the death of M. Allen Swift at the age of 102. The contents of the Swift gold-beating factory, which were donated to the Society of Gilders several years ago, have found a permanent home in the City of Pontiac.

With support from city officials, the SOG Museum committee worked around the clock, to not only re-create the Swift factory, down to the view from the windows, but to add detailed displays about gilding, making leaf, and gilding history.

The museum also features an exhibit of members’ work and a gilding gift shop. The day included a catered luncheon and time for sightseeing – Pontiac is home to many museums including the Walldog Museum, the Museum of the Music of the Civil War, a WWII Museum and the Route 66 Museum. www.pontiac.org 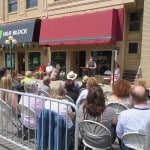 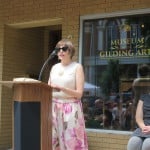 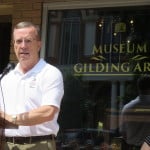 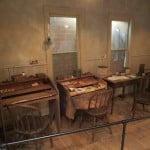 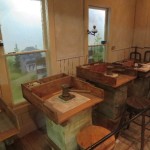 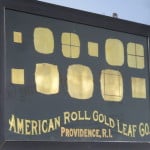 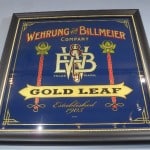 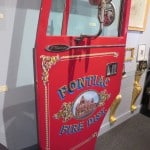 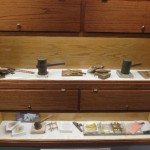 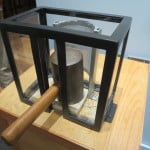 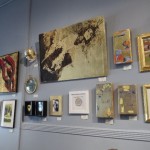 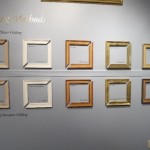 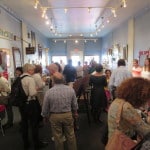